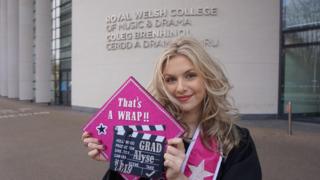 Two former students who alleged sexual assault and sexual misconduct by another student at a prestigious college say they felt “silenced”.

Alyse McCamish and Sydney Feder, both 23, are considering legal action amid claims the Royal Welsh College of Music and Drama did not investigate properly.

Ms McCamish claims it took six months for her allegation to be reported to the police.

The college said there was an “ongoing legal process”.

It added that it “would not be right to comment on specific detail”.

The Royal Welsh College, of which the Prince of Wales is president, is well known for its famous alumni, such as Sir Anthony Hopkins, Ruth Jones and Rob Brydon.

‘I lost faith in people who have power’

Ms McCamish, from Tennessee in the United States, moved to Wales when she was 19 after successfully auditioning for the college in Chicago, having been lured by the appeal of “such a beautiful country”.

But she alleges that during freshers’ week she was sexually assaulted by a fellow student, an allegation which he denied.

Ms McCamish, who is currently in the process of directing two films, says she eventually left the college early with a “diminished degree” because of her experience.

“It felt like they had such a lack of empathy for an arts school,” she said.

‘Not a safe space’

Ms Feder, from Connecticut in the United States, moved to Wales at 18 and said she felt unsafe from the beginning.

“From day one I had a horrible feeling in the pit of my stomach that this was not a safe space,” she said.

During her third year, Ms Feder says she was assaulted while alone in the female changing room during a rehearsal of a final-year show.

“I made a report to the college and it felt like screaming into the abyss. They interviewed me about it once. That was it. I was never spoken to again after I had made the report,” she said.

“It took them six months to tell the police.”

‘We need to tell someone’

Ms McCamish said she verbally complained to senior members of staff in June 2017 but the college did not notify the police of her complaint until January 2018.

“It took me a while to come forward. I was very determined for a while to not ever tell anybody in my head,” she said.

“I reported it and then ‘Me Too’ happened. So I went back to college thinking this is perfect timing, they’re going to take it seriously. But my experience was so the opposite of how sexual assault was being handled at the time.”

In an email chain in January 2018 seen by the BBC, in which staff members discuss Ms McCamish’s allegation, one senior staff member asks “it might pose the question why we didn’t report it earlier?”

Ms McCamish was interviewed by the police in January 2018 but no further criminal action was taken.

“The police told me the allegation would be on his record and that was enough for me. I trusted the college would handle it,” she added.

South Wales Police has confirmed no investigation is ongoing.

During an internal investigation by the college, Ms Feder and six other women came forward with allegations of misconduct against the same student.

John Watkins, of Bater Law, who represents the women, said the college failed to follow its own safeguarding policy.

He says the college decided to investigate Ms McCamish’s case separately to the other women’s allegations as it was considered to be “more serious”.

The student denied any allegation of sexual assault and said the incident alleged by Ms McCamish “simply didn’t happen”.

The college found on the balance of probabilities the allegations of inappropriate touching were proven, but there was insufficient evidence with regards to Ms McCamish’s allegation of sexual assault.

He was suspended for two weeks and, in a letter to students, apologised to anyone who “felt unsafe and uncomfortable around me”.

Ms Feder said she was never told of the decision relating to her allegation and she only found out about it when launching her legal action.

“When I found out I immediately cried. It was a few years too late,” she said. “They’d decided I wasn’t worth having that vindication at the time.”

Ms McCamish has also criticised the college’s handling of the aftermath of the investigation including an occasion in which a letter from the accused student was read out to their year group.

She said: “I just couldn’t believe it. I never had a voice. I never got a letter read out on my behalf. It was like they’d just totally silenced me.”

She also said in the week following her reporting of the alleged incident, she attended an improvisation class with the student.

She said the staff member to whom she had made the allegation allowed him to strip naked during an improvisation.

What does the college say?

In response to all the allegations, the Royal Welsh College of Music and Drama said: “The safety and well-being of our students and staff is our first priority and we have formal mechanisms in place to safeguard and support all members of the college community.

“We treat every report of any incident as serious, using best practice in applying our policies and procedures. We also keep our policies under constant review, seeking expert external advice and input.

“We are, and always will be, committed to listening openly to any member of our community who wants to report an incident to us – whether recent or historic – and encourage people to talk to us about any concerns.

“This allegation is the subject of a sensitive and ongoing legal process. Because we respect that legal process it would not be right to comment further on specific details.

“However we can confirm that there have been factual inaccuracies carried in reports to date. The board of directors is fully informed of the current situation and is keeping across any developments.”

If you need support with any of the issues raised in this story, these organisations may be able to help.