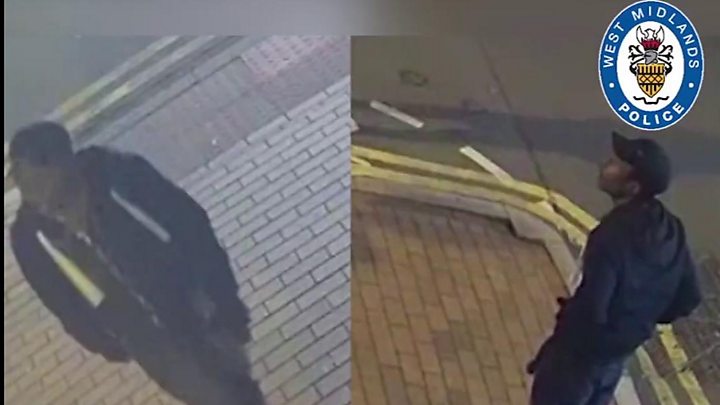 Media playback is unsupported on your device Media captionPolice are looking for this man after an attacker killed one victim and wounded seven other people Police hunting a man suspected of killing one person and injuring seven others in stabbings across Birmingham city centre say they have had a “strong response” after releasing CCTV footage.The…

Police hunting a man suspected of killing one person and injuring seven others in stabbings across Birmingham city centre say they have had a “strong response” after releasing CCTV footage.

The attacks in the early hours of Sunday sparked a massive manhunt.

Images of the man officers want to find were published on Sunday evening.

Detectives have been working through the night following leads from the public to identify and find the suspect, West Midlands Police tweeted.

The attacks happened at four different locations across the city centre during a 90-minute spell.

A 23-year-old man was killed in Irving Street at 01:50 BST on Sunday, while a man and a woman, aged 19 and 32, suffered critical stabbing injuries.

Five other people, aged between 23 and 33, were injured and taken to hospital. Two have since been discharged.

He is seen standing and walking on a street corner.

Three hours after the images were published, West Midlands Police tweeted: “We’ve had a strong response following our appeal to trace the #BirminghamStabbings suspect.

“Our detectives are following up several new lines of enquiry. This man is wanted on suspicion of murder.

“We’ve got a team of detectives working through the night to identify and trace the suspect.”

It added that a special hotline has been set up for members of the public to pass on information.

Earlier in the day, Ch Supt Steve Graham told reporters: “At this stage we believe that the attacks were random and we have no indication of a motive.”

He urged the public to remain vigilant, and call 999 if they spotted anything suspicious.

‘Impact on the city’

West Midlands Police were first called to Constitution Hill where a man sustained a superficial injury just after 00:30 BST.

Twenty minutes later they were called to Livery Street, near to Snow Hill railway station, where the 19-year-old man was critically injured and a woman was also hurt.

An hour later at 01:50 BST, police were sent to Irving Street, where the 23-year-old died and another man suffered serious injuries.

Ten minutes later, they were called to Hurst Street, in the city’s Gay Village, where the 32-year-old woman was critically injured and two men suffered lesser injuries.

The stabbings do not appear to be terrorism related or gang related, police said.

Mr Graham added: “We do not underestimate the impact that these incidents have had on the city of Birmingham.

“We declared this a major incident at the earliest opportunity and we have drafted in scores of officers to help with the investigation and patrol the city to reassure residents and visitors that we are doing all we can to apprehend the person responsible.”

Multiple witnesses saw the attacks, including Nikita Denton who was out celebrating her 29th birthday and helped stop one of the women bleeding in the street.

“I looked at him, facing him, and I can see he had a blade, not very big, and he was stabbing her in the neck.

“He wasn’t panicking and he wasn’t reacting or anything. After he stabbed her between five and seven times… he walked off as if nothing has happened.”

Officers have recovered a knife from a drain but Mr Graham said it was “way too early” to say if it was connected to the case.

When asked how the knifeman was able go for more than two hours without being caught, he described the suspect’s route through the city was “relatively unusual”.

He added: “There was no suggestion people had seen him running out, area searches were being made at the time, unfortunately the subject wasn’t caught.”

The force’s police and crime commissioner David Jamieson labelled the assaults “disturbing”, with the violence unfolding as revellers had been enjoying the night.