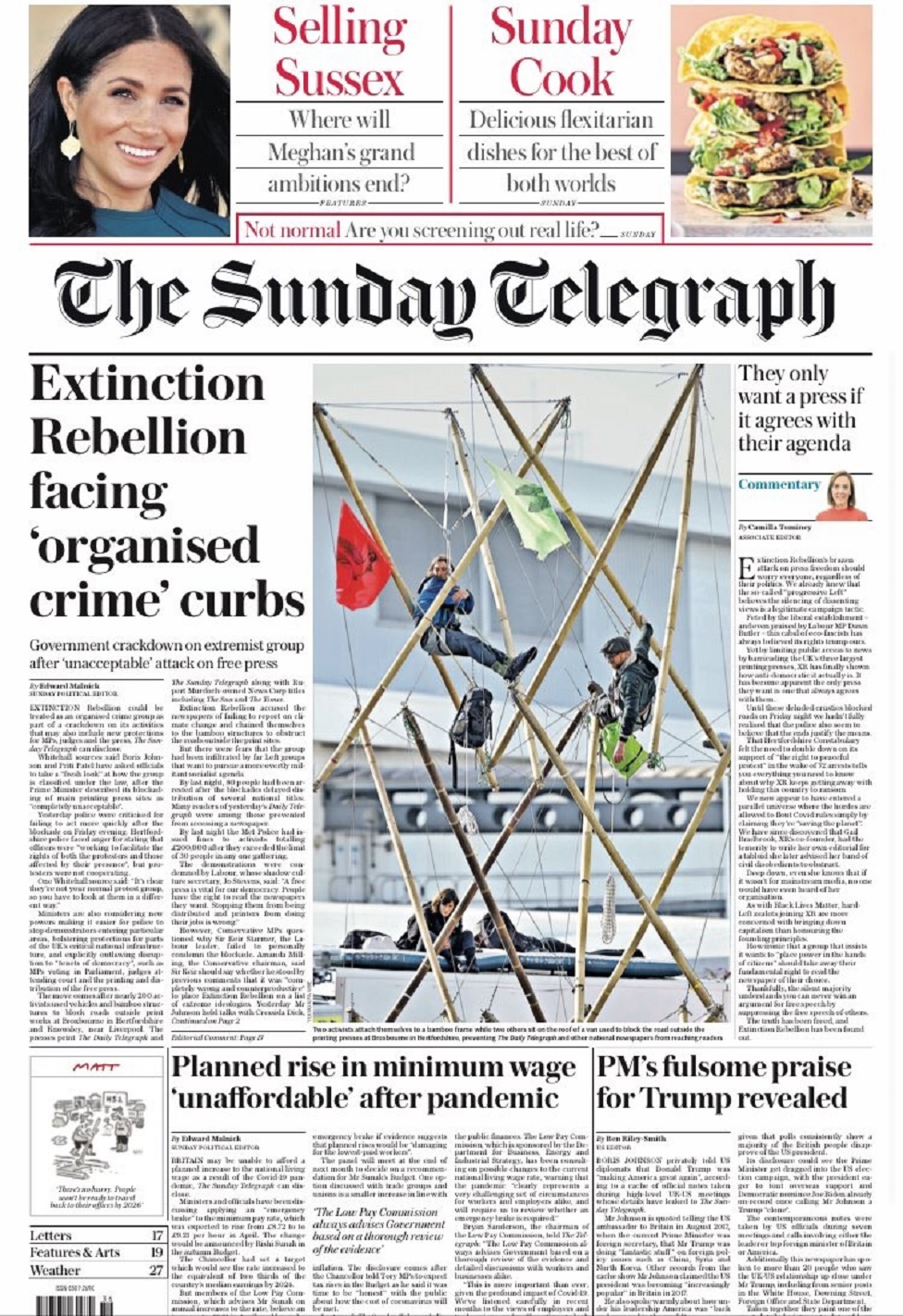 By BBC NewsStaffPublishedduration2 hours agoimage captionBrexit is back on the front pages, with the Sunday Express reporting that Boris Johnson will consider “starving the [EU] of access to cheap money on the financial markets” in the event no long-term trade deal can be agreed before the transition period ends at the turn of the year.image…

“PM wants EU to get real” is the Sunday Express’s front-page headline, as the UK and European Union gear up for the latest round of Brexit trade talks in London on Tuesday.

In the latest salvo from No 10, Boris Johnson is set to “starve the bloc” of access to cheap money on the financial markets in the event of no deal, the paper says. Its political editor, David Maddox, says the “arrogant” EU needs to alter its negotiating strategy if it wants an agreement because ministers now seem “rightly relaxed about no deal”, with UK trade agreements “beckoning around the world”.

The EU, meanwhile, wants to “keep the status quo – to have their fishcake and eat it”, is the message from the UK’s chief Brexit negotiator, Lord Frost, in the Mail on Sunday.

The paper says his remarks show that he will not be “browbeaten” and that the UK will not just be “chivvied back into line” in trade talks by his EU counterpart Michel Barnier.

However, the Observer’s leader column describes Downing Street’s approach to the negotiations as “highly irresponsible”. The paper highlights the fact that on one key sticking point – state aid – all the UK has offered is a “vague briefing” about big subsidies for technology companies.

There are harsh words for Extinction Rebellion’s climate change protestors in several papers.

“A sinister, shameful attack on free speech” is

the Mail on Sunday’s assessment of the blockades on roads to printing presses.

It admits that while no system is perfect, the UK’s privately owned papers competing against each other encourages “diversity of opinion”.

The Sunday Express says the demonstrations were “nothing short of an affront to democracy”. The paper reckons it “seems odd” that organisers of anti-lockdown demonstrations are fined £10,000, but Extinction Rebellion protestors “get away with their unlawful actions”.

“Planet-polluting morons” is how they’re described by Tony Parsons in the Sun on Sunday. He says their actions were “moronically destructive”, given the edition of the paper whose distribution they blocked carried an interview with the environmentalist Sir David Attenborough.

Camilla Tominey of the Sunday Telegraph calls them “eco-fascists” and says the demonstration has “finally shown how anti-democratic” Extinction Rebellion are. They only want a press “that always agrees with them”, she says.

The Sunday Times reports that anyone involved in similar demonstrations in the future will be treated as a “saboteur of democracy”, under plans being drawn up the government.

The paper says new subversion powers will protect printing presses, parliament and the courts from being accessed by protestors as they are deemed “key pillars of democracy”. In its leader column, the paper says it looks forward to seeing Home Secretary Priti Patel press police forces “to take a more robust line” on the group’s disruptive activities.

The Sunday Mirror reports that part of the Duke and Duchess of Sussex’s $125m (£94m) deal with Netflix could include a documentary about Princess Diana. A royal source has told the paper that discussions are ongoing which would see Prince Harry honour his mother’s history and heritage.

However, the same source says the plans could “further antagonise” the relationship between the Duke of Sussex and his brother, the Duke of Cambridge, who are said not to have spoken for three months.

“BBC in two” is the Sun on Sunday’s headline to a report suggesting the corporation’s new director general, Tim Davie, is considering a tiered licence-fee system.

The paper says “marquee shows”, such as Bodyguard, would be in an elite, more expensive package. Programmes including Eastenders and Blue Peter would form part of a so-called “basic BBC”.

However, the paper’s leader column urges Mr Davie to “proceed carefully”, suggesting viewers would be outraged if they had to fork out even more to watch “popular favourites” like Match of the Day and Strictly Come Dancing.

“PM’s fulsome praise for Trump revealed” is a headline in the Sunday Telegraph after official notes taken at meetings between the UK and the US were leaked to the paper.

In 2017, while he was foreign secretary, Boris Johnson is quoted as saying Mr Trump was doing “fantastic stuff” in dealing with China, and was “making America great again”.

The paper says the remarks are “eye-catching” given that polls consistently show a majority of Britons disapprove of the US president.

Finally, the Sunday People reports that thieves took jewellery valued at £140,000 from the home of the former England footballer Paul Gascoigne.

He believes a picture posted online alerted the intruders to the fact he was away from his flat in Poole on Monday night.

Among the other items taken were two steaks from his freezer but the ex-Tottenham and Rangers midfielder tells the paper the thieves were “considerate enough” to leave him with some chicken.