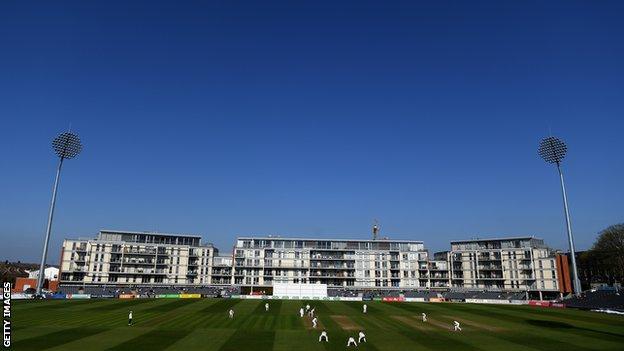 Gloucestershire’s Bob Willis Trophy game with Northamptonshire has been abandoned after a Northants squad member tested positive for Covid-19.

The player was not part of the group that travelled to Bristol but had been in contact with other squad members within 48 hours of developing symptoms.

A statement issued by both clubs said the decision had been taken “in the interests of player welfare”.

No play took place after lunch, which Gloucestershire reached on 66-6.

Graeme van Buuren top scored for the home side with 22 after they were put into bat before becoming one of Jack White’s two victims.

The game was finally called off just before 15:00 BST.

Neither side was in a position to reach the final of the competition after only picking up one win each in their opening four games in the Central Group, leaving them adrift of leaders Somerset and second-placed Worcestershire, who are playing each other at Blackfinch New Road in the final round of group fixtures.

The statement said news of the positive test “came to light” just before lunch in the first session of play.

“Although the player was not part of the group that travelled with the squad to Bristol (and has been self-isolating at home), further members of the Northamptonshire squad have been in contact with the player within 48 hours of the player developing Covid-19 symptoms,” the statement continued.

“Gloucestershire, Northamptonshire and the ECB are unified in the belief that player welfare is paramount and that no risks should be taken with the health and safety of the players, officials and administrators involved in this match.

“The match has now been abandoned and the Northamptonshire squad will return home today.”

Only two of the Northants players who started this game – captain Ricardo Vasconcelos and Saif Zaib – featured in the county’s previous match against Glamorgan in the T20 Blast on Thursday.

They are next due to be in action on Friday when Gloucestershire are scheduled to visit Wantage Road in the T20 Blast.

Meanwhile, the abandoned match was the last for umpire Jeremy Lloyds, 65, after a 41-year career in cricket, including more than a decade as a left-handed batsman and off-spinner with Somerset and Gloucestershire.

As an umpire, Lloyds stood in five Tests, 18 one-day internationals and England’s inaugural Twenty20 international against Australia in 2005.