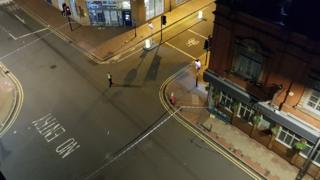 Image copyright @ShauninBrum Image caption Police set up a cordon at the junction of Hurst Street and Bromsgrove Street A number of people have been stabbed in Birmingham city centre and police have declared a “major incident”.West Midlands Police said they were called to reports of a stabbing at around 00:30 BST on Sunday, with…

A number of people have been stabbed in Birmingham city centre and police have declared a “major incident”.

West Midlands Police said they were called to reports of a stabbing at around 00:30 BST on Sunday, with other stabbings reported shortly afterwards.

Police said there were “a number of injured people” but they could not say how many or how seriously.

Mayor of the West Midlands Andy Street said the incidents “look to be related” but the motivation was unknown.

A “major incident” describes any situation involving serious harm or a security risk to the public.

It also means special arrangements are in place for all of the emergency services to work together.

Witness Cara Curran, a club promoter working in the Arcadian Centre, said it had been busier during the evening than it had been at any time since the start of lockdown.

She said she had finished her shift at about 00:30 BST and was drinking with colleagues when she heard a “loud bang and quite a lot of commotion”.

She added: “I found multiple people having fist fights… people from inside pubs and clubs came out and started to see what was going on.

“There were females, males, old people, young people, such a mix of people, it didn’t seem real at the time.

“Working on the club scene for over two years, I’ve always seen quite a lot of fights but it was nothing like tonight. The body language and demeanour was quite different.

“The amount of things that I’ve heard have happened tonight in the space of three hours, with the stabbings that have happened, the car crashes and multiple other things it’s such a huge shock to me.

“For me to be an eyewitness to something that has happened it’s been quite an emotional night to the point where I’m actually still a bit shell-shocked.”

Mayor Andy Street said he was expecting a police news conference to be called later on Sunday morning.

He said he had been briefed by the chief constable and could confirm there had been a “series of incidents in the Hurst Street area”.

He added: “The motivation is not yet understood. The area is calm and the public has been told to go about their business but remain vigilant.”

West Midlands Police said: “We are aware of a number of injured people, but at the moment we are not in a position to say how many or how serious.”

It said emergency services were working together at the scene, and making sure that those who were injured received medical care.

The statement continued: “Work is still going on to establish what has happened, and could take some time before we are in a position to confirm anything.

“At this early stage it would not be appropriate to speculate on the causes of the incident.

“The emergency services have well-rehearsed plans for dealing with major incidents. Our response is ongoing in Birmingham city centre and will be for some time. Cordons are in place, and there are some road closures.”

The force later said there had not been any reports of gunshots, adding: “We’re aware of some comments that gunshots were fired, this has not been reported to us at this stage.”

The police cordon is near the area known as the Gay Village in the centre of Birmingham, the BBC’s Simon Jones said.

Many people had been seated at outdoor tables eating and drinking on Saturday evening.

The streets in the area had already been closed to traffic due to coronavirus restrictions.