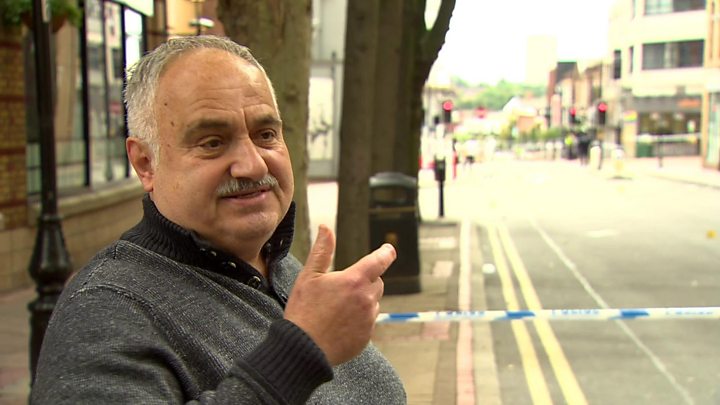 Media playback is unsupported on your device Media captionSavvas Sfrantzis: “After he stabbed her…he walked as if nothing happened” A knifeman who killed one man and wounded seven other people in a two-hour stabbing rampage across Birmingham city centre is being hunted by police. The first stabbing was in Constitution Hill at 00:30 BST then…

A knifeman who killed one man and wounded seven other people in a two-hour stabbing rampage across Birmingham city centre is being hunted by police.

The first stabbing was in Constitution Hill at 00:30 BST then the killer moved south, apparently attacking at random, officers said.

Murder inquiry detectives said they were hunting a single suspect.

The force urged anyone with CCTV or mobile footage to contact them.

One man died, another man and a woman suffered critical injuries and five other people were left with non-life-threatening injuries.

Ch Supt Steve Graham said the attacker went on to stab people in Livery Street, Irving Street and finally in Hurst Street, where the city’s Gay Village meets the Chinese Quarter, at about 02:20 BST.

Police said there was no evidence the stabbings were a hate crime.

A woman who was out celebrating her 29th birthday described how she helped another woman who was “on the street bleeding heavily”.

Nikita Denton, of Edgbaston, said: “My best friend Jay held her head and talked her through everything the whole time and wouldn’t leave her side.

“She looked very dazed and confused, she couldn’t talk. But she was talking to my friend with blinks.”

When paramedics arrived they asked them for help.

“I got water and used the torch on my phone to help them see the wounds as they didn’t have a torch at that time,” she said.

“There were about four wounds.”

She added: “I’d hate to think if we weren’t there that night as she would have been alone.”

He added they had received a number of descriptions of the suspect but would not be releasing any details for the time being.

He said: “The events during the early hours of this morning are tragic, shocking and understandably frightening.

“It does appear to be a random attack because we haven’t found any links between the victims, either in their nature or in where they were socialising.

“Please be assured that we are doing absolutely everything we can to find whoever was responsible and try to understand what exactly happened.”

Savvas Sfrantzis, who was working nearby, said he saw a man stab a girl multiple times but people thought at first he was trying to take her necklace.

“He was like very cold and he wasn’t panicking and he wasn’t reacting or anything. After he stabbed her between five and seven times… he walked off as if nothing has happened,” he said.

Officers earlier found a knife in a drain but Mr Graham said it was “way too early” to say if it was connected to the case.

“What I think it does suggest is the comprehensive nature of our inquiry – that already we’ve got people going down drains – we’ve got that level of detailed searches taking place,” he said.

David Nash, who was running the Village Inn in Hurst Street, said after a “normal night” he heard someone shout “stop him – he’s just stabbed somebody” between 02:00 and 02:15.

“The bars were starting to wind down and the next thing we know the area is engulfed with armed response vehicles, normal police vehicles, police on foot, ambulances,” he said.

“They just came from absolutely nowhere and the area was full of them and then the police helicopter was up.”

He said he then saw paramedics treating two people who seemed to have been stabbed.

Nathan Hudson, from West Midlands Ambulance Service, said 14 ambulances attended and he was among 11 paramedic officers who were also sent to help.

A team of St John Ambulance volunteers based at the Arcadian nightspot also treated casualties.

He tweeted: “All my thoughts are with those affected by the terrible incident in Birmingham last night.”

Witness Cara Curran, a club promoter working in the Arcadian Centre, said it had been busier during the evening than it had been at any time since the start of lockdown.

She said she had finished her shift at about 00:30 BST and was drinking with colleagues when she heard a “loud bang and quite a lot of commotion”.

The streets in the area had already been closed to traffic due to coronavirus restrictions.

The West Midlands Police and Crime Commissioner (PCC) David Jamieson said police would be working with the council to see if there were “any further measures that need to be taken in the city centre”, following the stabbings.

A rise in violence was “almost inevitable” due to the pandemic, when people were suffering “pent-up feelings” and some were unsure of their futures, the Labour PCC said.

Outside the cordoned-off area, much of the city centre, such as Birmingham’s Bullring shopping centre and the Sealife Centre in Brindleyplace, is open as usual.