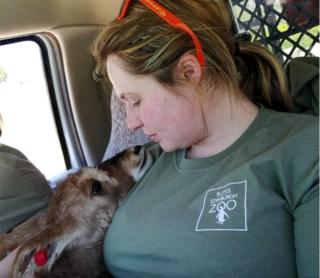 Image caption Phoebe Dowens says animals make as big an impact on her as humans do It’s not uncommon to have tattoos of loved ones, favourite footballers or even pets.But a Scottish zookeeper has gone one step further by immortalising her beloved animals in ink.Phoebe Dowens looked after animals at Edinburgh Zoo for seven years…

It’s not uncommon to have tattoos of loved ones, favourite footballers or even pets.

But a Scottish zookeeper has gone one step further by immortalising her beloved animals in ink.

Phoebe Dowens looked after animals at Edinburgh Zoo for seven years before moving to the Highland Wildlife Park in Kincraig.

Everywhere she goes, she takes her three – soon to be four – favourite animals with her.

Phoebe has worked with dozens of beautiful and exotic animals during her career and believes that by caring for them and spending more time with them than humans, they become part of her extended family.

She says animals can make as big an impact on her life as people.

Phoebe, originally from Edinburgh but now living in Kingussie, said: “My first animal tattoo was of Bertus the rhino on my arm. He is special to me because he was the first rhino I worked with. I was super into learning everything about rhinos at the time too.”

Bertus was at Edinburgh Zoo when Phoebe worked there but moved to Batu Secret Zoo in Indonesia three years ago.

Her next project was Belle the red river hog which she had tattooed on her leg.

Phoebe said: “She was at Edinburgh Zoo and when she died I wanted to commemorate her because I had really got to know her quite well when I worked in the hoofstock section. She struck a chord with me and she was very sweet and a great mum.”

The inspiration for animal tattoo number three came from a placement Phoebe went on in April 2019.

“I went to San Diego safari park for a month and that’s when I worked with Shafira and Acica the giraffes,” said Phoebe. ” I got them tattooed on my leg to remember the whole trip as it was very special.”

When Phoebe started working at Edinburgh Zoo in 2013 she was following in the hoofsteps of her great great uncle. He had worked there as a hoofstock keeper in the 1940s, so she was delighted to work in some of the same cages as he worked in.

Her family is nothing but proud.

“My mum and dad are happy I found a career that they know brings me enjoyment so they are fine with my tattoos,” said Phoebe. “I’m not going to continue to cover myself in them though. I’m just going to occasionally get the very special animals tattooed on me.”

And she already knows what her next one will be.

She said: “It’s going to be of Rotana – a male sun bear who was rescued from a small cage in Cambodia and brought to Edinburgh Zoo.

He was rescued by Free The Bears so his history is important and reminds me why I do this job.”

Phoebe is one of the zookeepers featured in a new programme on the BBC Scotland channel called Inside The Zoo.

The show follows staff at both Edinburgh Zoo and Highland Wildlife Park as they care for some of Scotland’s most-loved animals.

Gail Porter narrates the eight-part series which looks at how state-of-the-art science and conservation affect life at the zoo.

Inside The Zoo is on BBC Scotland channel at 20:00 on Monday 7 September.