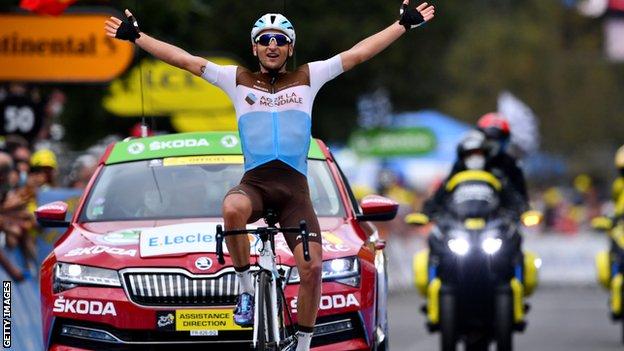 Yates survived several attacks to finish in a group containing many of the overall race favourites.

A tough day of climbing on the 141km-route from Cazeres-sur-Garonne to Loudenvielle scattered the peloton.

France’s Peters led home the survivors of a 13-man breakaway to record a memorable win.

However, it was a much less enjoyable day for home favourite Thibaut Pinot, who effectively lost all hope of becoming the first Frenchman to win the race since 1985.

Dropped on the second climb of the day, Pinot finished over 25 minutes behind Peters and lost around 19 minutes on all the main general classification contenders.

‘I’m not going to throw it away’

Yates also looked to be suffering up the final climb of the day on the Col de Peyresourde after Julian Alaphilippe’s burst sparked a series of attacks.

However, the Mitchelton-Scott rider responded each time to maintain his three-second advantage over Primoz Roglic.

“In the end I did my thing and tried to stay with the best guys, and here we are,” said Yates.

“Right at the bottom of the last climb [Tom] Dumoulin set a ferocious pace and I couldn’t hold the wheel.

“I had to ride at my own pace for a little bit, collect myself, but I pulled my way back and over the top I managed to stay with the guys so all in all it was a good day.

“It’s not every day you lead the Tour de France so I’m not going to throw it away, I want to keep it as long possible.”

‘It was a dream and I made it’

Riding in his maiden Tour de France, Peters produced the outstanding performance of the day after going clear of Ilnur Zakarin on the descent of the Port de Bales.

“This is crazy. It was already something unbelievable to win a stage on my first participation to the Giro d’Italia last year and now it’s the same at the Tour de France,” said the AG2R-La Mondiale rider.

“It was a dream and I made it. I knew Zakarin was stronger than me up the climbs but I never gave up.

“I convinced myself to not crack. I had seen in the downhill of Port de Bales that he descended like a goat so I was confident of beating him in the finale of the stage.”

Sunday’s ninth stage sees the race spend a second day in the Pyrenees as it travels the 153km route from Pau to Laruns before Monday’s rest day.