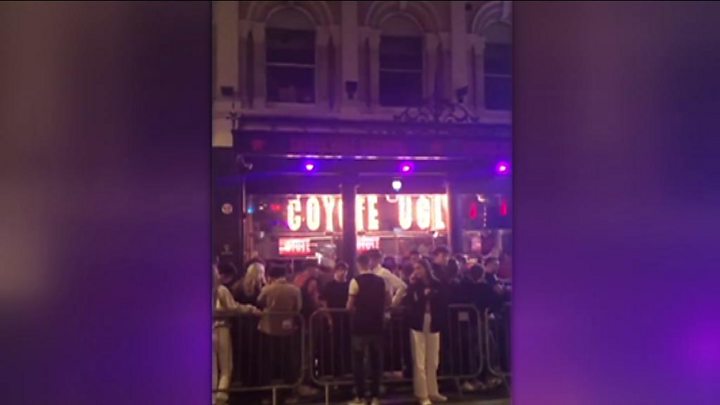 Media playback is unsupported on your device Media captionIan Cottrell said he was “shocked” at the lack of social distancing A popular bar in Cardiff city centre could be closed after a video showed crowds of clubbers appearing to ignore social distancing guidelines.The footage was captured outside the Coyote Ugly bar at about 00:30 BST…

A popular bar in Cardiff city centre could be closed after a video showed crowds of clubbers appearing to ignore social distancing guidelines.

The footage was captured outside the Coyote Ugly bar at about 00:30 BST on Saturday.

The nightclub said it adheres to coronavirus rules and turns away large crowds.

But Cardiff council said it could close the venue unless there are improvements.

“Our officers will be visiting the premises today to discuss last night’s scenes,” said a Cardiff council official.

“The council intends to use the images obtained from last night with a view to taking action against the venue for breaching Covid-19 health and safety measures, as set out by Welsh Government.”

The authority said it was the responsibility of businesses to ensure 2m social distancing was maintained inside and outside venues.

“The safety of visitors to the city centre remains a priority and processes to minimise the spread of the virus must be taken seriously,” added the council.

“Scenes like this are unacceptable and if immediate improvements are not made then the council could close the premises.”

City leaders said they would take action against any venues “not following the rules”.

The footage was captured by Ian Cottrell on lower St Mary Street in Cardiff and was posted on social media.

He said he was “shocked” at the lack of social distancing outside the bar.

What did police do?

He asked police officers nearby why they were not taking action but Mr Cottrell said he was told it was a matter for the establishment to comply with coronavirus guidelines.

Responding to that claim, South Wales Police said officers did engage with staff at the venue on Friday evening, and the venue has also been visited on Saturday “to try and prevent similar issues this evening and in the future”.

“Our officers work to engage, encourage and explain the legislation imposed by Welsh Government, and enforce where necessary and proportionate,” said a police spokesman.

“Policing our capital city is a huge undertaking, and videos such as the one posted on social media on Friday night do not capture the true demand placed on our officers, who work tirelessly to keep visitors to the busy area safe.”

What have Coyote Ugly said?

Coyote Ugly said it is “very careful” to comply with all the rules.

“Late in the evening we’ve had some big groups arrive, mixed households, and we simply turn them away,” said spokesman Sean McMahon.

“There are big placards both inside and out explaining the rules on social distancing.

“They turn up, we know where these groups are coming from but we tell them there’s too many and they aren’t coming in. There are no exceptions.

“It’s a safe venue. We have social distancing throughout. There’s no dancing on the bars, like there used to be. You can see from our CCTV that it’s working.

“It’s a shame because someone coming past has just snapped this late in the evening.”

Public Health Wales (PHW) has expressed concerns that a lack of social distancing among 20-30 year-olds has increased the spread of Covid-19 to other groups of people.

He said the Coyote Ugly footage showed individuals were not keeping 2m apart.

“We would really urge people, if they’re going out and taking advantage of the opening of the night-time economy, they should avoid being on the same tables and being with people from outside their grouped households,” he told BBC Wales.

“They should do their best to socially distance while they’re out.”

“We would make a direct appeal to young people to remember that even if they feel that they would not be badly affected by Covid-19 were they to test positive, should they pass it on to older or more vulnerable family members, friends or colleagues it could be extremely serious, and even fatal,” a statement said.

The latest figures show eight new cases in Cardiff in the last day.

Health Minister Vaughan Gething previously said stag and hen-dos should be a thing of the past following a rise in cases in Cardiff.

He blamed the spike in the capital on “indoor contact rather than outdoor contact” and warned against pub crawls, and against ignoring health advice on socialising.