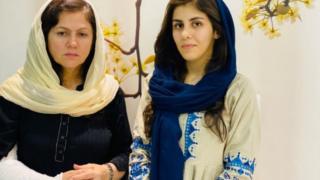 Image copyright Shuhra Koofi Image caption Shuhra Koofi, right, said her mother inspired her to get into politics Shuhra Koofi was desperate. Her mother, a two-term member of the Afghan parliament, had been shot as they travelled back to Kabul together by car. Shuhra begged her mother, Fawzia Koofi, not to close her eyes. “What…

Shuhra Koofi was desperate. Her mother, a two-term member of the Afghan parliament, had been shot as they travelled back to Kabul together by car. Shuhra begged her mother, Fawzia Koofi, not to close her eyes. “What will I do without you?” she asked.

“I was horrified because I thought I had lost my mum,” Shuhra told the BBC, of the assassination attempt last month. “But then I tried to control myself because she needed my help.”

Fawzia Koofi is an outspoken critic of Afghan fundamentalists and has challenged the Taliban across the negotiating table. She has paid a heavy price for her politics – two assassination attempts, both witnessed by her daughter. In 2010, her convoy was ambushed by the Taliban, and in August this year she was shot by unknown assailants on the road.

On 14 August, Shuhra and her mother were returning to Kabul after visiting Parwan province, north of the Afghan capital when they realised there were two cars following them. They felt a creeping realisation they were about to be ambushed.

“Just before the attack, a black car overtook us and our driver beeped the horn,” Shuhra said. “Then we heard the shots from behind – from my mum’s side.” There were two gunshots, Shuhra said. The first one missed their car.

Shuhra was next to Fawzia on the back seat. She tried to cover her mum’s head and told her to slip under the seat as the driver accelerated away. She never saw the attackers.

“We had to get away or they would shoot again,” she said.

Back in 2010, Fawzia and Shuhra were travelling in a car through the rural Nangarhar province of Afghanistan. Fawzia was already a member of parliament and close ally to then-Afghan president, Hamid Karzai.

As the car wound through the province in a small convoy, it was ambushed.

“I was only 10 at the time. I was sitting in the car between my mum and sister,” Shuhra said. I just remember the noise of the shooting. It was non-stop.”

Fawzia survived unscathed and a police escort drove the convoy to a safe place where they were airlifted to Kabul. The Taliban claimed responsibility for the ambush.

“It was easier to accept it because we knew who had done it,” Shuhra said. “The second time, the attackers were unknown and no-one was taking responsibility, so it’s been more difficult and scary for our family.”

Like Fawzia, her two daughters grew up seeing deadly violence around them. Sometimes a family member was among the casualties. Shuhra’s maternal grandfather was also a member of parliament and he was killed by militants.

Her father contracted tuberculosis after he was imprisoned by the Taliban and died when Shuhra was still a child. Fawzia raised both her daughters while she pursued her career in politics.

“I always had a fear of losing someone in my family and I didn’t experience a normal life,” Shuhra said.

Seconds after the shooting in August, her mother looked at her and said, “I think I am injured”, Shuhra recalled. It was a moment she would “never forget”.

After that, Fawzia didn’t say a word. A bullet had pierced the metal frame of the car from behind, torn through the seat cushion and hit Fawzia in her arm, below her right shoulder.

“I thought I’d lost her. I kept saying, ‘Please don’t close your eyes, talk to me’, and I tried to keep her awake,” Shuhra said. “I lowered my head and my mum’s head and I told her, ‘Don’t look up, they might shoot again’.”

Fawzia had just recovered from Covid-19 and suffers from iron deficiency. Shuhra took off her scarf to attempt to stem the bleeding.

“It was dark and I couldn’t see her wound. But as I was tying my scarf, my hands were covered in blood,” Shuhra said.

They reached the hospital after 40 long minutes. It took two CT scans for doctors to find the bullet and remove it from Fawzia’s upper arm. She was discharged after a week and is still recovering.

A critic of the Taliban

Fawzia Koofi has often articulated the aspirations of Afghan women, whose voices are largely ignored. When she sat down with the Taliban last year, she urged them to bring female negotiators to the peace talks. The Taliban representatives laughed at the suggestion.

She remains active in peace talks between the government and the Taliban, expected to resume this weekend. She suspects those who oppose peace are behind the recent attack against her.

The Taliban have denied any involvement. Other armed groups are also active in the area where the ambush took place. Shuhra said she and her mother were traumatised by the assault – and disillusioned.

“She is disappointed because she thinks she has helped her people and wonders why someone would want to kill her,” Shuhra said.

Afghanistan is often regarded as a hostile place to be a woman and female politicians still face many obstacles. Fawzia and her sister Mariam were among those banned from contesting the 2018 parliamentary elections for having “suspected links with an illegal militia” – charges the women say are trumped up.

Shuhra knew the difficulties a woman would face, especially after seeing unflattering comments about her mum in the press and on social media, but she is studying political science at the American University of Afghanistan in Kabul.

“I always wanted to be involved in politics. I am following my mum’s path, she is my role model,” she said. Shuhra and her sister had both encouraged their mother to continue in politics, despite the attacks.

“We have chosen this way and we will continue,” she said.