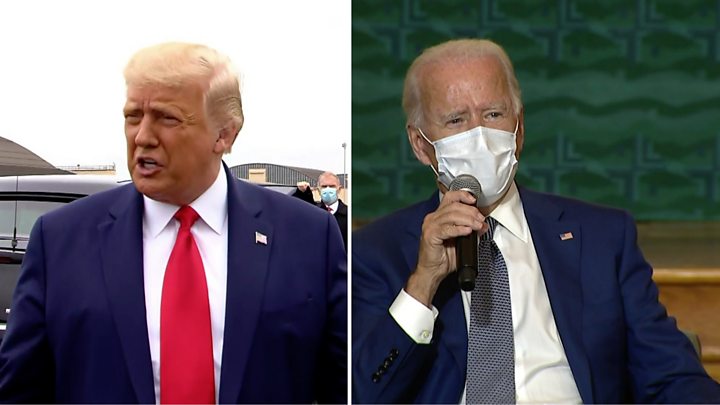 Media playback is unsupported on your device Media captionJacob Blake: Comparing Trump and Biden’s Kenosha visits US Democratic presidential candidate Joe Biden has spoken over the phone with Jacob Blake, the black man who was shot in the back by police in Kenosha, Wisconsin, sparking big protests.Mr Blake, who remains in hospital paralysed, said “he…

US Democratic presidential candidate Joe Biden has spoken over the phone with Jacob Blake, the black man who was shot in the back by police in Kenosha, Wisconsin, sparking big protests.

Mr Blake, who remains in hospital paralysed, said “he was not going to give up” whether he walked again or not, Mr Biden said.

He was speaking at a church meeting in the city where the shooting took place.

The US leader surveyed areas damaged by the often violent protests that followed the shooting with messages of support for the police.

He did not meet Mr Blake’s family, saying it was because they wanted lawyers present.

Wisconsin is an important state in the upcoming presidential election.

Mr Trump narrowly won it in 2016, and for decades the state has backed the eventual winner of the presidency whether Republican or Democrat.

The president has been pushing a campaign message of “law and order”. However, Mr Biden has accused Mr Trump of stoking racial division.

Wisconsin’s Governor, Tony Evers, said he would “prefer that no-one be here, be it candidate Trump or candidate Biden”.

Biden pitches himself as healer-in-chief

This was an important visit for Joe Biden. Some Black Lives Matter protesters in Kenosha had told us in recent days they had been disappointed that a senior Democrat had not come sooner and that the president got here first.

Local Democrats had already been frustrated that after the party’s national convention in neighbouring Milwaukee had been cancelled because of the pandemic, no socially distant events were planned there as a replacement.

The backdrop is the tight margin by which Donald Trump won this state in 2016.

Biden supporters came out in small groups to gather outside events he held at a church and a school chanting “Let’s go Joe!” and “Dump Trump!” His appearances were low key, even sombre.

It was not what he said but who he met that made the headlines.

Praise from the family of Jacob Blake about the compassion he showed in speaking with them would have been exactly what his campaign team would have hoped for.

And at a community event representatives of law enforcement agencies were present alongside activists and business owners who had feared looting and damage, illustrating the message of unity and healing that Joe Biden has been trying to send.

But in a telling statement at that event, one Black Lives Matter organiser asked when all those words would turn into actions.

Joe Biden and his wife met Mr Blake’s relatives at Milwaukee airport, with Mr Blake on the phone. The meeting was private but Mr Biden and the Blake family lawyer later gave details.

Mr Biden said he was struck by the family’s “overwhelming sense of resilience and optimism”.

Mr Blake “talked about how nothing was going to defeat him, how whether he walked again or not, he was not going to give up,” Mr Biden said.

Confirming the meeting, the family’s lawyer Ben Crump said it was “engaging” and that the family “was very impressed that the Bidens were so engaged and willing to really listen”.

At the community meeting in Kenosha, Mr Biden attacked President Trump’s leadership, and argued that the US was at an “inflection point” in its history.

He also quipped “they’ll shoot me” if he explained a policy at length, a comment quickly picked up on by conservative media, given Mr Biden’s record for making gaffes.

How did it compare with Mr Trump’s visit?

The US president toured rubble from burned buildings and met police representatives when he visited on Tuesday.

“These are not acts of peaceful protest but, really, domestic terror,” Mr Trump said, later adding: “We have to condemn the dangerous anti-police rhetoric.”

He expressed sympathy for those hurt in confrontations with police, saying he felt “terribly for anybody who goes through that”. But he said he did not believe there was systemic racism in law enforcement.

“The president was there earlier in the week as the president of the United States. Vice-President Biden is there today as a candidate, as a political candidate,” he said.

Anthony Davis, the president of the local chapter of the NAACP civil rights group, told NBC that he opposed both men’s visit.

“I said that Kenosha would welcome them any other time,” he said. “But things here are fragile. And we, in this community, really need to put our energy into healing ourselves, sitting down and speaking in detail only the way that locals can.”

A police officer shot Jacob Blake seven times in the back during an arrest as the 29-year-old tried to get into a car where his three children were seated.

Mr Biden has called for the officer who shot him in the back to be arrested. “He believes that, based on everything he has seen, charges appear warranted, but that there should be a full investigation to ensure all the facts are known first,” his campaign said ahead of the trip.

In an interview on Wednesday, Attorney General Bill Barr said the situation was different to that of George Floyd, whose death in March triggered global protests.

“Floyd was already subdued, incapacitated in handcuffs and was not armed,” Mr Barr said. “In the Jacob case, he was in the midst of committing a felony and he was armed.”

Mr Blake was not armed when he was shot, but a knife was later found in his car by investigators.

Two people protesting against the shooting of Mr Blake were killed in Kenosha amid widespread looting and vandalism. A 17-year-old has been charged over the deaths.