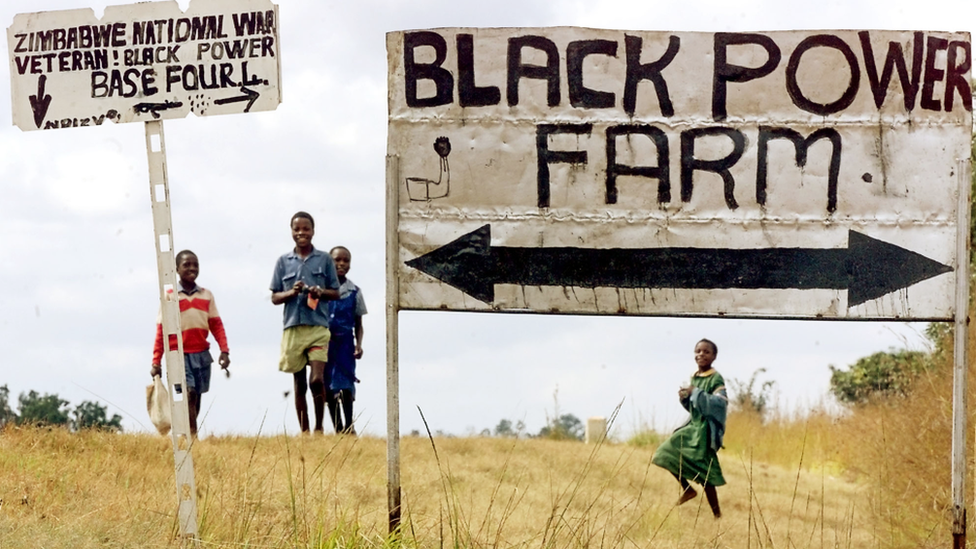 Publishedduration4 hours agoZimbabwe is making deals with mainly white farmers – both local and foreign – who lost farms two decades ago in a controversial and often violent land redistribution programme that sought to redress colonial-era land grabs, but which contributed to the country’s economic decline. Wilf Mbanga, editor of the Zimbabwean news site, considers…

Zimbabwe is making deals with mainly white farmers – both local and foreign – who lost farms two decades ago in a controversial and often violent land redistribution programme that sought to redress colonial-era land grabs, but which contributed to the country’s economic decline.

Wilf Mbanga, editor of the Zimbabwean news site, considers the implications of these agreements and whether they will mend relations with the West.

The news that the government of Zimbabwe has finally agreed to compensate white farmers has surprised the world.

In Zimbabwe it has polarised opinion and set WhatsApp and Twitter alight. Many are outraged, many are disappointed – no-one is happy.

Except perhaps President Emmerson Mnangagwa, who hailed the agreement as “historic”, and the headof the mainly white Commercial Farmers Union (CFU), Andrew Pascoe, who described it as “a miracle”.

Under the terms of the agreement some 3,500 white farmers will share a compensation pot of $3.5bn (£2.6bn) – but this is only for improvements to the land.

The CFU agreed that compensation for compulsorily acquired land would not be given.

The agreement says half this sum is to be paid within the next 12 months, with the balance spread over five years.

The others affected by the land grab are some 400 black Zimbabwean farmers and a handful of foreign white farmers,

around 37 of them, who were protected by Bilateral Investment Protection and Promotion Agreements (Bippa).

The government recently announced that these farmers would be given their land back.

“Where the situation presently obtaining on the ground makes it impractical to restore land in this category to its former owners, government will offer the former farm owners alternative land elsewhere as restitution,” the statement said.

Approved by the constitution

A disgruntled group of so-calledwar veterans, who have the most to lose as they are the ones who were resettled on much of the commercial farmland – the lion’s share went to government ministers, senior officials and the politically well-connected – has denounced the agreement vociferously and threatened to sue the government.

The lawyer’s letter addressed to Mr Mnangagwa describes the agreement as “highly discriminatory, degrading and akin to selling out the liberation struggle”.

What few seem to realise is that Mr Mnangagawa has not invented this solution to the contentious “land issue”.

He has actually stuck firmly to the letter of the new constitution, negotiated and approved by both his Zanu-PF party and the opposition Movement for Democratic Change (MDC) during the national unity government back in 2013 and voted for overwhelmingly by Zimbabweans in a referendum.

Under section 295 of the constitution, indigenous farmers as well as white farmers whose properties were protected under Bippas, are entitled to compensation for both land and improvements.

Other white local farmers are only entitled to compensation for improvements – not the land itself.

Mr Mnangagwa has said land reform cannot be reversed, but paying compensation is key to mending ties with the West.

Land no longer ‘the issue’

But if he thinks his decision to implement the terms of the constitution now will win him hearts and minds, he is mistaken.

Very few Western governments are talking about land any more – they are more concerned about the human rights abuses and allegations of rampant corruption taking place on his watch, which rival those under the tenure of Robert Mugabe, who was forced to resign by the army as president in 2017.

Twenty years ago agriculture was the largest employer and the highest earner of foreign exchange in Zimbabwe.

In 2000 the 20-year reign of Mr Mugabe was seriously threatened for the first time by the MDC.

Mr Mugabe’s response was to give his war veterans – those who fought in Zimbabwe’s 1970s liberation struggle against white-minority rule – carte blanche to invade white-owned commercial farms, under the guise of restoring historical imbalances in land ownership.

Since then the country has fallen from breadbasket to begging basket, one of the least food-secure nations on the planet with unemployment at unprecedented levels – some analysts say it is 90%.

The tobacco sector has rebounded thanks to support and exports to China, but in 2018 alone Zimbabwe spent $724m on agricultural and food imports.

The whole question of land in Zimbabwe is now extremely complex – in effect all farm land belongs to the state, so technically it has no commercial value, and cannot be used as collateral for borrowing.

But commercial farming without borrowing is impossible.

In a misguided attempt to bridge this financing gap, the government stepped in with a programme called “Command Agriculture” whereby it supplies farmers with all the inputs – fertiliser, seeds, chemicals, tractors and other equipment – needed for a season.

This has been characterised by massive corruption and politicking, further entrenching the patronage labyrinth established by Mr Mugabe to entrench his power.

Documents unearthed by investigative journalist Hopewell Chin’ono, who spent more than a month in remand prison recently on charges of inciting violence in anti-government tweets, showed that one primary school received 200 tractors from the programme.

Serious questions have been raised about Zimbabwe’s ability to fund its decisions.

The government says it will issue a long-term debt instrument on international capital markets set to mature in 30 years.

But already the external debit is out of control, with 73% arrears.

“Bonds imply promises to repay. We won’t get any support until we carry out reforms to restore our productive capacity,” he says.

“We have no way of repaying new debts when the existing ones are beyond us.

“But if we fix the economy by restoring confidence, we will get back to earning respect as well as money.”

Like everything in Zimbabwe it is a cat-and-mouse situation – and it will take more to get the agricultural sector back on its feet.

Wilf Mbanga is editor of The Zimbabwean