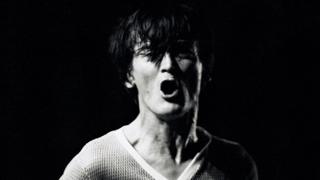 Image copyright Steve Rapport/ Getty Images Image caption Feargal Sharkey fronted Northern Irish punk band The Undertones, and in the 1980s had a huge hit as a solo artist with A Good Heart Singer Feargal Sharkey has criticised a water company for “dumping” thousands of hours’ worth of sewage in a river.The former Undertones front…

Singer Feargal Sharkey has criticised a water company for “dumping” thousands of hours’ worth of sewage in a river.

The former Undertones front man, a “life-long fly fisherman”, said the 12,734 hours of dumping in the River Kennet last year was “utterly shocking” and potentially illegal.

Thames Water acknowledged the duration of sewage discharge but said it was due to storms and so was “heavily diluted”.

It added discharges into rivers stopped flooding in homes and streets.

Sharkey, who fronted punk band The Undertones and went on to have a successful solo career in the 1980s, said: “The UK Government was taken to court in 2012 regarding dumping sewage and allowing water companies to dump sewage into rivers.

“The court ruled that that should not be allowed to happen, and in fact ruled that it should only possibly ever happen in what the court referred to as ‘exceptional circumstances’.

“Well can someone please explain to me what the exceptional circumstances were?”

On Twitter, Sharkey described the 46-mile river – a Site of Special Scientific Interest (SSSI) which runs from Malborough, Wiltshire, to Woolhampton, Berkshire – as “one of the rarest habitats on earth”.

A Thames Water spokesman said: “We work hard to minimise storm discharges, while also looking at how we can improve the system for the future, including reducing groundwater infiltration and increasing capacity.

He added sewage discharges were not “the only sources of pollutants” but that “animal faeces from livestock and wildlife, along with run-off from farms and roads, also contribute to the hazards”.

Sharkey said: “In Thames Water you’re talking about a company that has paid billions of pounds in dividends to shareholders. Perhaps they should have spent some of that money in maintaining and upgrading their sewage networks.”

A Thames Water spokesman said: “Our shareholders are in it for the long term and have not taken a dividend for three years to prioritise investment in improving service for customers, and to protect the environment.”