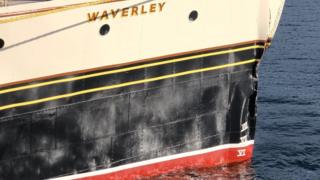 Image copyright Gavin Saxby Image caption Eyewitnesses say the paddle steamer struck the pier An emergency response has been launched after a paddle steamer collided with Brodick Pier in Arran. Police and paramedics are at the scene of the incident involving The Waverley and the coastguard has set up a helicopter landing site nearby.One eyewitness…

An emergency response has been launched after a paddle steamer collided with Brodick Pier in Arran.

Police and paramedics are at the scene of the incident involving The Waverley and the coastguard has set up a helicopter landing site nearby.

One eyewitness has told BBC Scotland she saw passengers falling over when the boat crashed at about 17:15.

Rita McLeod, who was waiting to board the Waverley, said she also saw people being taken away in ambulances.

“We were actually queued up waiting to get in when it crashed,” she said. “It came in bow first. It came in far too fast.”

“We saw a lot of people falling, a few people fell over. There were people taken away in ambulances.

“We saw a lot of people, pretty badly shaken, coming off.”

The ship was due to into Brodick at about 17.00 after leaving Greenock in the morning.

It has only just restarted sailing after a two-year pause due to urgent boiler repairs.

Another eyewitness saw the crash from the departure terminal.

Anne Cochrane from Bishopbriggs near Glasgow, left the Waverley when it docked in Brodick earlier in the day, and was waiting to board when the incident occurred.

She said: “It just crashed into the pier when it was coming back from the Holy Isle. We’re just stuck in the departure terminal. We’ve had no information.”

Neither Ms Cochrane nor Ms McLeod were hurt.

People who were waiting for the Waverley in Brodick to take them back to the mainland are now waiting to see if it will be possible to leave the island tonight.

The number of passengers onboard is not known, however the paddle steamer is operating with reduced passenger numbers due to Covid-19 restrictions.

The Marine Accident Investigation Branch has been informed of the incident.

The Waverley set sail for the first time in two year less than two weeks ago, an event which was itself delayed due to an “unexpected technical and administration issue”.

The ship, described as the world’s last seagoing paddle steamer, missed the 2019 season as it waited for urgent repairs.

A funding appeal was launched in June 2019 and it hit its target in December after receiving a received a £1m grant from the Scottish government to help with the restoration.

This paddle steamer, built by A & J Inglis of Glasgow and first launched in October 1946, has been involved in accidents before.

It struck the breakwater at Dunoon with 700 passengers on board, 12 of whom suffered minor injuries, in June 2009

In July 1977 it was badly damaged when it struck rocks near Dunoon.