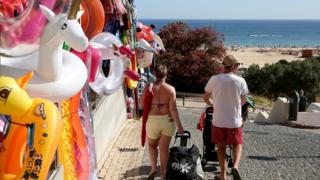 Image copyright Getty Images People arriving in Wales and Scotland from Portugal must now self-isolate for 14 days, but the rules covering England and Northern Ireland are unchanged.The difference between the nations has been criticised as confusing.The rules for Wales apply from 04:00 BST on Friday, while in Scotland they begin 24 hours later on…

People arriving in Wales and Scotland from Portugal must now self-isolate for 14 days, but the rules covering England and Northern Ireland are unchanged.

The difference between the nations has been criticised as confusing.

The rules for Wales apply from 04:00 BST on Friday, while in Scotland they begin 24 hours later on Saturday.

Cases in Portugal have risen in the past week beyond the threshold at which ministers generally consider imposing 14-day mandatory self-isolation.

The Department for Transport said decisions around adding or removing countries from the quarantine list “take into account a range of factors” – including how many people are being tested.

“Portugal has drastically increased its testing capacity, as well as taking measures to control the spread of the virus,” said a spokesperson, adding it would closely monitor the situation.

The six islands are Crete, Mykonos, Zakynthos (or Zante), Lesvos, Paros and Antiparos.

Scotland has already reintroduced self-isolation measures for arrivals from Greece and has now added Portugal and French Polynesia to its list of countries requiring quarantine.

Changes to the rules for arrivals from Greece coming to England have been considered – but Greece will stay on its safe list for now.

In Portugal, the seven-day infection rate has increased from 15.3 to 23 per 100,000 people. This is above the threshold of 20 which is when the UK government generally considers triggering quarantine conditions.

Greece’s rate overall is below the threshold at 13.8 coronavirus cases per 100,000 people in the seven days to 2 September, down from 14.9 a week earlier.

UK Transport Secretary Grant Shapps said on Thursday: “There are no English additions or removals today. We continue to keep the travel corridor list under constant review and won’t hesitate to remove countries if needed.”

“Nonetheless, holidaymakers are reminded – 14-day quarantine countries can and do change at very short notice.”

He said the government takes several factors into account, including the prevalence of the virus as well as the level and rate of change, how many tests the country is doing, the extent of the contained outbreak and the government’s actions.

Northern Ireland’s department of health also confirmed that NI would not make any further changes at present.

The changes have drawn criticism from industry experts as well as holidaymakers.

“The quarantine policy is in tatters and dividing the United Kingdom,” said Paul Charles, chief executive of travel consultancy firm The PC Agency.

“Consumers are totally confused by the different approaches and it’s impossible to understand the government’s own criteria any more on when to add or remove a country.

“The current strategy has to change. The weekly reviews have been causing anxiety and financial pain for so many consumers and travel firms,” he added.

Rory Boland, editor of Which? Travel, said: “Days of speculation around this announcement meant many people rushed to pay extortionate prices for flights back to England to avoid having to quarantine on their return – only to now find out there was no need.

“The government knows this and yet it continues to offer no clarity around how these decisions are made.”

One aviation boss described travelling abroad right now as “quarantine roulette” because the list of destinations which are affected keeps changing.

But the governments in Westminster, Edinburgh and Cardiff are now clearly at odds over which countries pose a clear risk.

Portugal’s infection rate is above the UK government’s benchmark of 20 cases of the virus for every 100,000 people.

But the UK government has surprised us all and not added Portugal to the list for England. It’s not clear why.

Greece is even more complicated as the Welsh government is opting for a policy where only people arriving from certain Greek islands have to self-isolate while Scotland has introduced a quarantine for arrivals from across Greece.

For months the travel industry has been lobbying the UK government for an approach where they consider particular regions in a country but ministers in London are not keen on the idea.

The quarantine was already hard or impossible to police.

But discrepancies between different UK nations makes it even harder as someone could, theoretically, fly into Newcastle from Greece and drive into Scotland. That person should self-isolate for 14 days, but no-one will be checking.

Some holidaymakers have told the BBC they have paid as much as £1,000 for flights to get home from Portugal in anticipation of the rules changing.

Kelly Jones and her family changed their flights home from the Algarve from Saturday to Friday at a cost of £900 to avoid potential quarantine because she did not want her children to miss out on two weeks of school.

The 45-year-old from Birmingham said the situation was “absolutely disgusting”.

“It’s cost us a lot more money and it’s money we didn’t need to spend now. We’ve lost an extra night in our villa – we won’t get that back – we’ve got a hire car, so we’re taking that back a day early.”

She added: “The government just change the goalposts left, right and centre at the moment. It’s embarrassing.”

Damian Martin from Swansea – who is currently on holiday in Lagos, Portugal – said he only arrived earlier on Thursday.

“I had already switched my holiday from Spain and I won’t be able to come back early,” he said. “I will be able to self-isolate, I think, but I work for a supermarket so will have to check in with them.”

He added: “I’m supposed to be here eight nights. I might as well try to enjoy it.

What are the latest quarantine changes?

England and Northern Ireland: No further additions – latest lists can be found here

Every year, more than two million Britons visit Portugal. Most head to the Algarve in the south, drawn by sunny Atlantic beaches, picturesque fishing villages and golf courses.

During May and June, the Portuguese government reopened its restaurants, coffee shops, museums and beaches. Hotels have mainly reopened, but nightclubs remain closed.

Are you currently on holiday in Portugal or Greece? Have you made plans to travel there? Share your thoughts by emailing haveyoursay@bbc.co.uk.