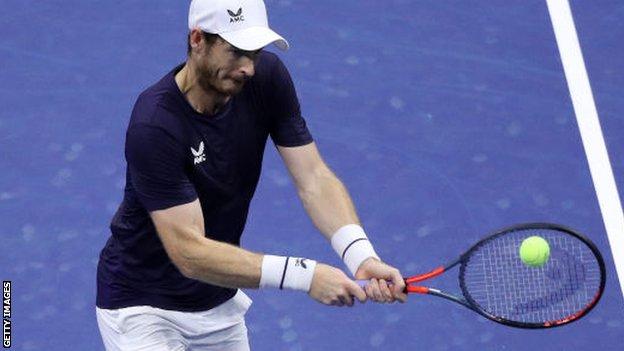 Andy Murray won his first Grand Slam at the US Open in 2012Andy Murray was overpowered by Felix Auger-Aliassime in the US Open second round, losing 6-2 6-3 6-4 in New York.Murray, 33, came back from two sets down in his first-round match on Tuesday but never threatened to do the same against the 20-year-old…

Andy Murray was overpowered by Felix Auger-Aliassime in the US Open second round, losing 6-2 6-3 6-4 in New York.

Murray, 33, came back from two sets down in his first-round match on Tuesday but never threatened to do the same against the 20-year-old Canadian.

He was not able to create a break point against the 15th seed, who hit 52 winners to Murray’s nine under the roof on Arthur Ashe Stadium.

Auger-Aliassime will face Britain’s Dan Evans or Corentin Moutet next.

The British number one and France’s Moutet must finish their second-round match on Friday after heavy rain stopped play on Flushing Meadows’ outside courts.

“He got quite a lot of free points with the first serve, and then even when I was getting a racket on it he was able to dictate off the first shot of the rally,” said Murray.

“Physically, I actually did pretty well I thought in the first round. But I think the more tournaments that you play, the more matches that you play, you build up that sort of robustness in your body which right now I don’t really have.”

Although this defeat was very one-sided, Murray can take plenty of positives from the past two weeks at Flushing Meadows, having won two matches at the Western and Southern Open before coming from two sets and a break down to overcome Nishioka on Tuesday.

That victory was his first Grand Slam singles match since a career-saving hip resurfacing operation in January 2019. After returning in doubles, he missed last year’s US Open to focus on his singles return and was then ruled out of January’s Australian Open with a pelvic injury.

Given all that, it was a monumental effort to win in nearly four hours and 40 minutes against Nishioka but the effect was apparent in Thursday’s night session as Murray struggled to live with Auger-Aliassime’s dazzling array of shots.

The Canadian completely dominated the first set, dictating play from the baseline and hitting 18 winners to Murray’s one.

Murray was more competitive in the second set but Auger-Aliassime broke in the eighth game and an ace gave him a two-set lead.

He then converted his fourth break point in the fifth game of the final set and while Murray kept fighting, he only delayed the inevitable with the Canadian serving out the win to love.

Murray will now turn his attention to the clay and preparing for the delayed French Open, which is due to start on 27 September at Roland Garros.

Auger-Aliassime, who the US Open boys’ title in 2016, will try to reach the fourth round of a Grand Slam for the first time when he faces Evans or Moutet.

On this evidence, the world number 21 will provide a tough test for most opponents if he manages to play at a similarly high standard.

His service game was particularly impressive against one of the game’s great returners, hitting 24 aces and not allowing Murray to rack up a single break point.

“I think it’s all come together. We’ve been away from tennis for five months and I’ve been working on my serve. Even with nerves I was able to serve well,” said Auger-Aliassime.

“But in the back of your mind you know you are facing Andy Murray. You never know what tricks he’s got in his pocket. To close it out is not easy. You’re facing a great champion.”

Analysis – Emphasis on rest for Murray

A complete performance by the young Canadian offered Murray nothing in the way of encouragement.

Fifty-two winners flashed past him, 24 of them aces, and with his energy levels severely diminished by Tuesday’s four-and-a-half-hour marathon, this was a bridge too far.

Murray’s emphasis will now be on rest, and the transition to clay for the French Open, which is likely to be his first appearance on the surface in more than three years.

He says he is more positive about his future than he was two months ago, but knows it will take many months before his body is properly ready for a gruelling Grand Slam fortnight.

Evans with work to do

The 30-year-old had fought off two set points for 77th-ranked Moutet in the third, but was a point away from holding serve and taking it into a tie-break when play stopped.

Now they will return to court five – after fellow Briton Cameron Norrie’s third-round match against Spain’s Alejandro Davidovich Fokina – at about 18:30 BST on Friday.

Which player the enforced overnight break will favour remains to be seen, with neither having momentum in a fourth set where there had already been four breaks of serve before Moutet missed his chances to clinch the third.

Both men showed their frustrations throughout a gripping match where numerous errors were punctured by occasional brilliance, leading to a series of emotional outbursts from each side of the court.

A slow start saw Evans in danger of losing the opener at 4-2 down before he fought back to win the next four games and gain an early advantage.

The Briton found himself in the same losing position in the second set, only this time he was unable to recover as 21-year-old Moutet kept his focus to level.

The pair hit 40 unforced errors between them in an erratic third set where there were 15 break points contested and it remained delicately poised when they were taken off court after almost three hours of play.