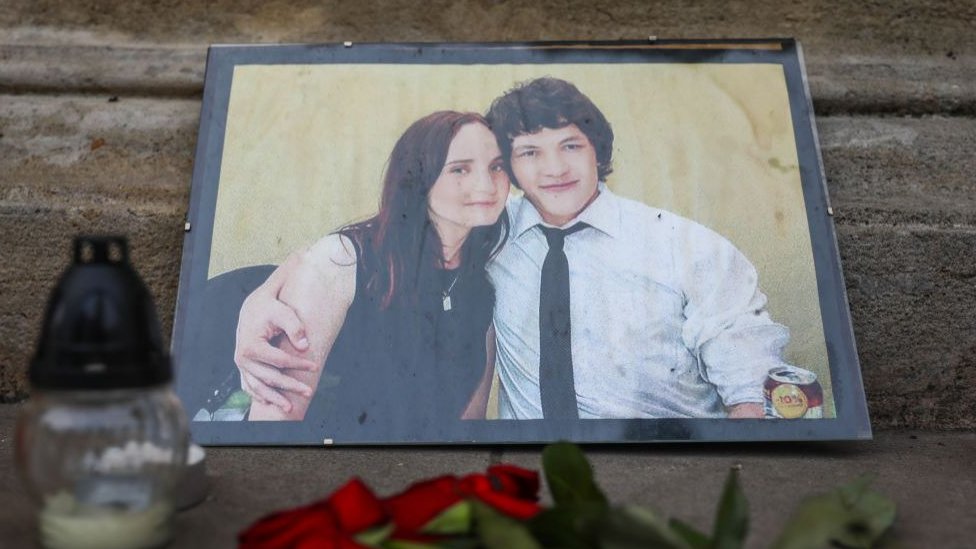 Publishedduration5 hours agoimage copyrightGetty Imagesimage captionThe murder of Jan Kuciak and his fiancée Martina Kusnirova sparked protests in SlovakiaA court has found businessman Marian Kocner not guilty of ordering the killing of investigative journalist Jan Kuciak and his fiancée in 2018, in an attack that rocked Slovakia.The murders triggered mass protests, leading to the downfall…

A court has found businessman Marian Kocner not guilty of ordering the killing of investigative journalist Jan Kuciak and his fiancée in 2018, in an attack that rocked Slovakia.

Another man has been jailed for 25 years for taking part in the murder.

But judges found that prosecutors had failed to prove Kocner and a third defendant had ordered the killings.

What did the court say?

Their acquittals were announced by the court in Pezinok, north of the capital Bratislava.

“The crime was committed but it has not been proved that Marian Kocner and Alena Zsuzsova ordered the murder,” Judge Ruzena Sabova said in her ruling.

“The court therefore acquits the defendants.”

The judge had not even finished reading out her verdict when relatives of Kuciak and his fiancée Martina Kusnirova left the courtroom, reports BBC correspondent Rob Cameron.

He says that prosecutors are likely to appeal against the not-guilty verdict, which came as a surprise,

‘I’m not a saint’ – Kocner’s comments

Kocner, 57, has always denied any involvement.

“I am not a saint, but I am not a murderer either. I’m certainly not a fool who wouldn’t realise what a journalist’s murder would lead to,” he told jurors during the trial.

Kocner will remain in prison after being sentenced this February to 19 years for forgery in an unrelated case.

Who was Jan Kuciak?

Kuciak and his fiancée were shot dead in their house near Bratislava on 21 February 2018, in the first such targeted killing of a journalist in Slovak history. They were both 27.

In April, former soldier Miroslav Marcek was jailed for 23 years after admitting to carrying out the killings and another suspect was jailed for facilitating the attack.

Kuciak worked for aktuality.sk as an investigative reporter. He wrote about corrupt businessmen in Slovakia, EU subsidy and VAT fraud, as well as Italy’s notorious ’Ndrangheta mafia and its attempts to cultivate relationships with Slovak politicians.