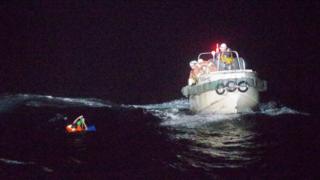 Image copyright Reuters Image caption One seaman was saved by the Japanese coastguard The Japanese coastguard has rescued one person from a cargo ship thought to have sunk during a typhoon with more than 40 crew and 6,000 cattle on board.The seaman, who was found drifting in a life jacket, said the ship had capsized.…

The Japanese coastguard has rescued one person from a cargo ship thought to have sunk during a typhoon with more than 40 crew and 6,000 cattle on board.

The seaman, who was found drifting in a life jacket, said the ship had capsized.

The Gulf Livestock 1 sent a distress signal from the East China Sea after being caught up in Typhoon Maysak.

The search for the rest of the crew and ship continues but has so far failed to find any more survivors.

The crew of the freighter includes 39 seamen from the Philippines, two from New Zealand, and two from Australia.

According to the Japanese coastguard, the man rescued is one of the Filipino crew, who said the ship’s engine failed before it capsized after being hit by a wave.

Sareno Eduarodo, a 45-year-old chief officer, said the crew had been instructed to put on lifejackets and that he jumped into the water.

He said he did not see any other crew members before he was rescued.

On Wednesday night, the ship sent a distress call from waters to the west of Amami Oshima island in southwestern Japan.

The Philippine Department of Foreign Affairs said its consulate in the Japanese city of Osaka was “monitoring the situation and coordinating” with authorities.

The Japanese coastguard “is launching a second search and rescue mission prior to the expected incoming typhoon”, it said in a press release.

Liezel Pitogo, 38, last spoke to her husband Lindon, a seafarer on the ship, on Tuesday evening.

He said they were travelling to China but were a bit worried about the weather, she told the BBC, speaking from Quezon province in the Philippines.

“His phone was unreachable on Wednesday,” Ms Pitogo said. “I thought it’s just a problem with the erratic signal when they are on the sea but I saw a Facebook post from a seaman’s wife about a cargo ship that went missing so I started contacting and asking some of the other wives.”

Both Australia and New Zealand said they were providing consular assistance to the families of their crew members.

Strong winds and torrential rains from the typhoon battering the region are hampering the search effort for the ship.

After moving through the East China Sea, Typhoon Maysak, named after a Cambodian tree, made landfall early Thursday in the South Korean port city of Busan.

At least one person has been killed, more than 2,200 people have been evacuated to shelters and around 120,000 homes were left without power in the affected region.