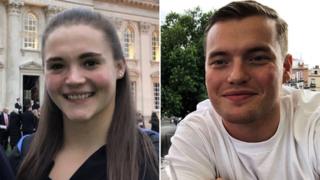 Image copyright Met Police Image caption Saskia Jones and Jack Merritt were killed by a knifeman who had been released from jail on licence A catalogue of failings have been found in the way people convicted of terror-related offences are monitored by the authorities in England and Wales.An independent review found “gaps” in the powers…

A catalogue of failings have been found in the way people convicted of terror-related offences are monitored by the authorities in England and Wales.

An independent review found “gaps” in the powers used to check up on such offenders.

And it highlighted an “unreliable” flow of information about their behaviour, such as remarks “glorifying” terrorism.

The review was launched after convicted terrorist Usman Khan killed two people in an attack in London in November.

Khan had been on licence from prison when he fatally stabbed Saskia Jones and Jack Merritt at Fishmongers’ Hall near London Bridge on 29 November last year.

Justice Minister Chris Philp said the government was legislating to require terrorism offenders to take lie detector tests – a measure the report endorses – and said other proposals were being considered.

Jonathan Hall QC, who conducted the review, said the authorities tended to “over-focus” on the impact of restrictions on offenders when they were let out – rather than considering the “overall risk” they posed.

He said meetings involving different public protection agencies, such as the police, the prison service and probation officers, were “dominated by information exchange rather than active management”, with a single case taking two hours to discuss.

Mr Hall criticised a risk assessment tool used by the Prison and Probation Service in England and Wales, which he said “seriously minimised” the severity of terrorism offences and “accepted the offender’s characterisation (and in some cases denials)” of their crimes.

“It was suggested to me that one possible reason was that [the risk assessment tool] is often completed by a prison psychologist, in a therapeutic context in which the offender’s ‘buy-in’ to the process is deemed to be particularly important,” he said.

Among other problems the report found a “significant gap” in the authorities’ ability to monitor the risk of terrorism posed by “dangerous” offenders convicted of non-terror related offences.

It also said opportunities to reduce the risk offenders posed was “lost” because of an “unreliable” flow of information about their behaviour in prison, such as comments “glorifying” terrorism, overheard by jail staff.

Mr Hall added that there was a “surprisingly limited” circle of knowledge about terrorism offenders in the community, with police borough commanders in London “not always aware” of the identity of such individuals in their area.

He called for a “cultural shift” so that information was shared more widely.

The report, which makes 45 recommendations, was completed in May – three months after a second attack involving a released terrorism prisoner.

Sudesh Amman, had recently been freed from prison when he stabbed two people on Streatham High Road, in south London in February.