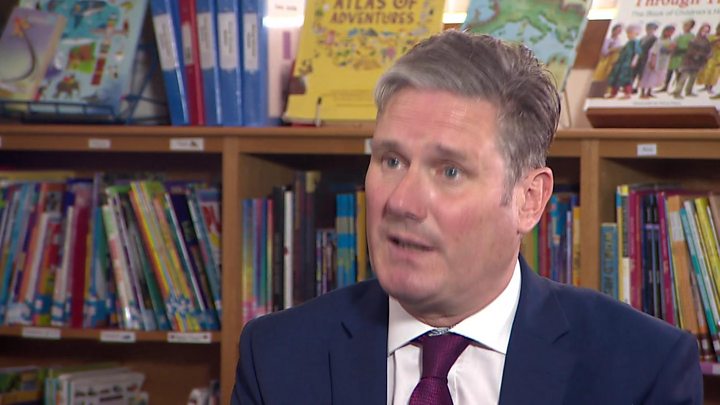 Image copyright Getty Images Image caption Richard Leonard insists that he still has the backing of his party The Scottish Labour leader has said he is “absolutely convinced” he is the best person to take the party into next year’s Holyrood election.Richard Leonard said he could see no one else who would do a better…

The Scottish Labour leader has said he is “absolutely convinced” he is the best person to take the party into next year’s Holyrood election.

Richard Leonard said he could see no one else who would do a better job.

He described criticism of his leadership as an “an act of sabotage” and pledged to stand against anyone who challenged him for the job.

He also appeared to suggest that MSPs who have spoken out against him could be replaced by some “new blood”.

In an interview with Sky News, Ms Reeves said opinion polls in Scotland were “dire” for Labour despite the party appearing to be neck-and-neck with the Conservatives across the UK as a whole.

The shadow Cabinet Secretary urged Mr Leonard to “consider his position and do what he thinks is right for Scotland and for Scottish Labour”.

A group of Labour peers and grandees – Helen Liddell, Meta Ramsay, George Robertson and George Foulkes – have also issued a statement urging him to “do what is best for the party, and for the country”.

Labour leader Keir Starmer has said the issue was one for Scottish Labour, and insisted that he and Mr Leonard had a “very good working relationship”.

In the latest in a series of BBC Scotland interviews with party leaders, Mr Leonard said he “of course” took some responsibility for the position Scottish Labour found itself in.

But he said the party was much wider than the group of MSPs who have called on him to quit and insisted he still had the support of the party as a whole.

He said: “Anybody who comes under criticism has a period of reflection, but I am absolutely convinced that I am the best person to lead the Scottish Labour Party into those elections.

“I cannot see anybody, at the moment, who I think would make a better leader of the Scottish Labour Party.”

Mr Leonard went on to say that he did not believe his critics could trigger a leadership contest – but insisted he would stand against anyone who did challenge him.

And with the party having five leaders in the six years before he was elected to replace Kezia Dugdale in 2017, he said that ditching the leader when things were not going well “does not work” for Scottish Labour.

Mr Leonard also said party members would have a choice about which candidates they wanted to see at the top of its regional lists for the election.

He added: “I am keen to see some fresh blood in, and to be honest with you the last 36 hours have really persuaded me that we need some new voices, we need greater diversity, we need some new blood and new energy in that parliamentary group.

“I think that could only benefit the long term future of Scottish Labour.”

Mr Leonard said he was “absolutely committed” to ensuring the party achieved gender balance after the election, and was “seriously considering” whether to have female candidates at the top of every regional list.

He also said he was confident that the pandemic meant people “re-evaluate their priorities” ahead of the election, and would turn to Scottish Labour because of its focus on “recovering the economy, tackling the jobs crisis and investing in public services like our National Health Service”.

Why are some people critical of Mr Leonard’s leadership?

There have been concerns about Mr Leonard’s leadership from some senior party figures ever since he was elected to the role.

Opinion polls suggest Scottish Labour is trailing a distant third behind the SNP and Scottish Conservatives ahead of the election next May.

The party slumped to fifth in last year’s European elections after winning just 9.3% of the votes – down from 26% in the previous election in 2014 – and lost all but one of its seats in last year’s general election.

There are fears from pro-UK campaigners that another poor performance by Labour in next year’s Holyrood election would increase the chances of the SNP winning a majority – and potentially lead to a second independence referendum.

Those concerns led to James Kelly resigning as Scottish Labour’s justice spokesman earlier this week, saying he had no confidence in Mr Leonard’s leadership.

Mr Leonard says he has received messages of support from across the party, with Scottish Labour MSP Neil Findlay tweeting that the colleagues who were calling for his head were “pathetic” and guilty of “treachery with a snarl”.

In his BBC Scotland interview, Mr Leonard said the question of whether indyref2 should happen if the SNP wins a majority was “hypothetical” and he did not accept that “we are going to lose the election and the SNP will romp to victory”.

But he said the priority for the next Scottish government should be about “turning around the economy and creating jobs” after the pandemic rather than “constitutional bickering”.

He added: “There are hundreds of thousands of people across Scotland who will be losing their jobs because the job retention scheme is coming to an end at the end of October.

“There are people who are losing sleep at night, anxious about what their future is and what the future for their families is.

“These are big concerns that people have got and that is what I want to focus our attention on.”

The Scottish government’s handling of the pandemic

Mr Leonard predicted that the mood of the country would change before May, and the Scottish government would face a “reckoning” over how it had handled the pandemic.

He described the high number of coronavirus deaths in the country’s care homes as a “scandal”.

And he said the government had questions to answer over the guidance it had issued and “whether or not they violated the human rights of people simply by dint of the fact that they were old and they were in residential care”.

Mr Leonard also called for an independent judge-led inquiry which would be based in Scotland and would examine the Scottish government’s response to the pandemic.

He said this could examine questions such as why Scotland did not go into lockdown sooner than it did, which he said could have saved many lives.