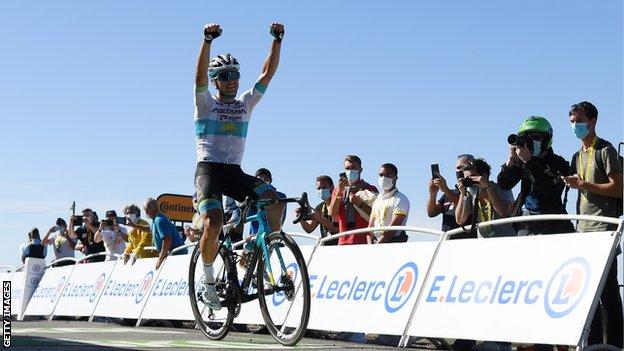 Alexey Lutsenko won a stage of the Vuelta a Espana in 2017Astana’s Alexey Lutsenko claimed the biggest success of his career with victory in stage six of the Tour de France as Britain’s Adam Yates retained the leader’s yellow jersey.Lutsenko left the rest of the breakaway behind on a steep climb with 17km to go…

Astana’s Alexey Lutsenko claimed the biggest success of his career with victory in stage six of the Tour de France as Britain’s Adam Yates retained the leader’s yellow jersey.

Lutsenko left the rest of the breakaway behind on a steep climb with 17km to go and finished alone on Mont Aigoual.

Yates finished in the bunch, with the main favourites content to save their attacks for another day.

“We defended well and I get another day in yellow,” said Yates.

“I got the jersey in a strange situation but hopefully we did it proud.”

France’s Julian Alaphilippe, who lost the yellow jersey to Yates on Wednesday after he was docked 20 seconds for taking a bottle inside the final 20km, sprinted late on to grab one second back in a show of defiance.

Mitchelton-Scott rider Yates, who said before the race he is targeting stage wins instead of the overall title this year, leads Slovenia’s Primoz Roglic by three seconds.

He should keep the jersey after Friday’s stage seven, which is one for the sprinters, before facing two tough days in the Pyrenees that lead into Monday’s first rest day.

“Those two stages are going to be really tough but we’ve got a super strong team so I’m looking forward to it,” added Yates.

“I still want to win a stage but it’s hard to throw away time in the lead so I’ll play it day by day and set what happens.”

A strong eight-man breakaway, that included Olympic champion Greg van Avermaet and Ireland’s Nicolas Roche, built up a six-minute lead on the flat start to the 191km stage from Le Teil, suggesting the winner would emerge from that group.

Jumbo-Visma, Ineos Grenadiers and Mitchelton-Scott all worked on the front to cut that deficit to about three minutes after the first two climbs of the day to bring the main favourites back into contention, but Lutsenko proved too strong.

The Kazakh champion kept upping the pace on the Col de la Lusette, which features sections of 10% gradient, to shed riders until just he and American Neilson Powless were left.

Lutsenko soon dropped him too to take the summit alone before comfortably riding up the final drag to Mont Aigoual for his first Tour stage win.

Cofidis’ Jesus Herrada, who fought back after being distanced earlier on the climb, finished second, while Van Avermaet sprinted away from Powless for third.

“This victory is very important for me – I’ve worked so hard to get this win,” said Lutsenko.

“I rode my tempo and gave it my all to create a gap big enough to win.”

Ireland’s Sam Bennett increased his lead over Peter Sagan in the green jersey points classification by beating the Slovakian at the intermediate sprint and will look to extend his advantage further on Friday.