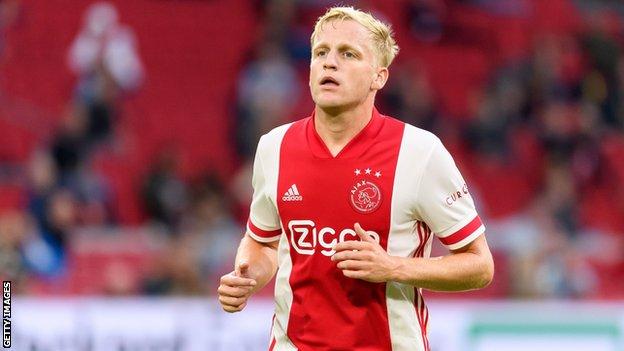 Van de Beek has won 10 caps for the NetherlandsManchester United have signed Netherlands midfielder Donny van de Beek from Ajax for £35m, plus £5m in add-ons, on a five-year contract.Van de Beek, 23, played 175 first-team games for Ajax, scoring 41 goals and helping them make a surprise run to the 2018-19 Champions League…

Manchester United have signed Netherlands midfielder Donny van de Beek from Ajax for £35m, plus £5m in add-ons, on a five-year contract.

He will be available for United’s opening game of the 2020-21 season against Crystal Palace on 19 September.

“I cannot begin to explain how incredible an opportunity it is to join a club with such an amazing history,” he said.

“I am now ready to take the next step in my career and perform at the highest level and there is no higher standard than Manchester United.

“This team has some of the best midfielders in the world and I know that I can learn from them and also bring my own strengths to the group.

“Having spoken to the manager about his vision for this team, the direction that the club is going in is hugely exciting and I cannot wait to be a part of that.”

Boss Ole Gunnar Solskjaer added: “Donny has all of the technical attributes needed to perform in this team and has the personality required to succeed at Manchester United.

“His ability to see space, time his movements and read the game will really complement the qualities that we have in midfield and his arrival really strengthens the depth of talent we have in that position.”

United confirmed Van de Beek will wear the number 34 shirt in tribute to his former Ajax team-mate Abdelhak Nouri, who suffered brain damage after a heart attack during a pre-season friendly game in 2017.

Borussia Dortmund’s England winger Jadon Sancho is also a target for Solskjaer but a deal has stalled over the size of the fee.

It was evident Solskjaer did not trust his back-up players. He named the same XI a lot after last season’s restart and did not make a change in the Europa League semi-final defeat by Sevilla until the 87th minute. If he had faith in those players he would have brought them on before he did.

Van de Beek gives them options. They play 4-3-3 but he gives them the alternative of playing with a diamond and two up front, to rest Bruno Fernandes and Paul Pogba, who ran out of steam at the end of the season.

We might not find out what Solskjaer’s first-choice XI is for a little while – and if Sancho does come that will be another ‘problem’ for him.

Where does Van de Beek fit in at United?

What can new signing Van de Beek add to Solskjaer’s United side? Who will he replace? And where can he play?

A look at his stats from Ajax last season suggests he is much closer in style to Bruno Fernandes than he is to any of United’s other midfielders.

We’ve collated his stats compared with United’s other midfielders – you can read more about that here.