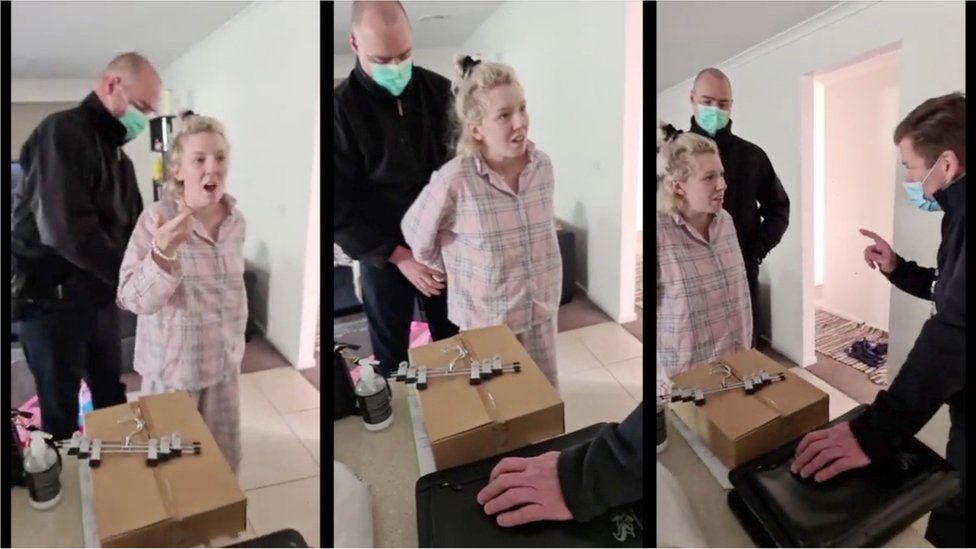 Publishedduration2 hours agoimage copyrightFACEBOOKimage captionPolice arrested Zoe-Lee Buhler in her home for posting about an anti-lockdown protest onlineThe arrest of a woman in Australia for promoting an anti-lockdown protest online has drawn criticism, after video of the incident went viral.Footage shows officers handcuffing pregnant woman Zoe-Lee Buhler, 28, in her home in Victoria on Wednesday…

The arrest of a woman in Australia for promoting an anti-lockdown protest online has drawn criticism, after video of the incident went viral.

Footage shows officers handcuffing pregnant woman Zoe-Lee Buhler, 28, in her home in Victoria on Wednesday in front of her partner and children.

She starts crying during the arrest, telling police: “I didn’t realise I was doing anything wrong.”

Authorities have defended the officers, saying they acted appropriately.

Victoria has been in lockdown since July to curb a coronavirus outbreak that has fuelled Australia’s second wave.

Authorities have imposed stay-at-home rules and a curfew in Melbourne, the state capital. The lockdown has closed many businesses and banned gatherings around the state.

Many people support the measures but others oppose them, and they have targeted by a fringe anti-lockdown movement.

Last week Victoria Police warned it would arrest people for organising protests in breach of the ban on gatherings.

The video – which was live-streamed on Facebook and has been viewed over two million times – shows Ms Buhler and her partner speaking to police in their home in the city of Ballarat. The Victoria Police officers are seen with a warrant.

Ms Buhler, who is wearing pyjamas, then offers to delete her post.

“My two kids are here – I have an ultrasound in an hour,” she says. “This is ridiculous… I didn’t realise I was doing anything wrong.”

But the officers respond by telling her she has been charged with “incitement” over a planned protest in Ballarat on Saturday. The event is part of wider anti-lockdown rallies.

What’s been the response?

“Now is not the time to protest about anything. Because to do so is not safe,” he said on Thursday.

Police Assistant Commissioner Luke Cornelius added: “[I’m] outraged to say there are still people in our community who think it’s a good idea at the time of this deadly pandemic to leave home and protest.”

But the incident has been criticised by human rights activists and opposition lawmakers on the left and right of politics.

“Arresting people pre-emptively for the act of organising peaceful protests or for social media posts is something that happens all too often under authoritarian regimes, and it should not be happening in a democracy like Australia,” said Elaine Pearson of Human Rights Watch.

Critics also warned that it could further stoke anti-lockdown sentiment or conspiracy theories, noting the video had been shared among groups in Australia and the US.

How tough has Victoria’s lockdown been?

The lockdown has worked to slow the virus – Victoria has recorded below 100 cases on most days this week, compared to over 700 during the peak in August.

Supporters say the police enforcement measures have been necessary to this success.

But civil liberties activists have argued Victoria’s restrictions are among the harshest seen in Western democracies.

Under the current lockdown most residents are only allowed outside for an hour per day.

The state government has warned the lockdown may extend beyond 13 September, its scheduled finish date.