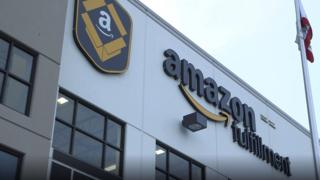 Image copyright Amazon Online retail giant Amazon has said it will create a further 7,000 UK jobs this year to meet growing demand.Amazon said it had already added 3,000 roles so far in 2020, and so by the end of the year it will have created a total of 10,000 new jobs.This will take its…

Online retail giant Amazon has said it will create a further 7,000 UK jobs this year to meet growing demand.

This will take its total permanent UK workforce to more than 40,000.

Amazon says the jobs will be permanent and pay a minimum of £9.50 an hour. It is also recruiting 20,000 seasonal UK posts for the festive period.

The company has faced criticism in the past from unions over the way it treats staff and health and safety.

Amazon is recruiting for roles at more than 50 sites. It said the creation of the new roles, which will include engineers, graduates, human resources, IT, health and safety and finance specialists, as well as the teams who will pick, pack and ship customer orders, was in response to growing customer demand.

“At the centre of the job creation programme are three new, state-of-the-art fulfilment centres in Darlington, Durham and Sutton-in-Ashfield, Nottinghamshire, each fitted out with advanced Amazon Robotics technology and each creating more than 1,000 new permanent roles,” the firm said in a statement.

“Construction of these new fulfilment centres began last year. Darlington started operations in May and the sites in Durham and Sutton-in-Ashfield will launch later this autumn.”

Business Secretary Alok Sharma said the pandemic had been a “challenging time for many businesses” but that the new Amazon jobs were “hugely encouraging”.

Jobs are being cut around the UK at present due to the effects of the coronavirus pandemic and as the government’s jobs retention scheme starts to wind down.

The number of employees on UK payrolls fell by 730,000 between March to July, according to the most recent figures.

However, while many sectors have been hit hard, some companies have said they need more workers.

Courier firm DPD and B&Q owner Kingfisher said in June that they would be hiring thousands more staff.

While High Street shops are still struggling with the effects of lockdown, including lower footfall, many more people are shopping online and want goods delivered.