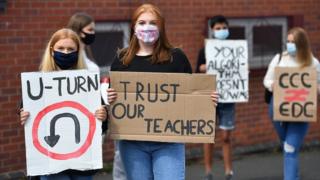 Image copyright PA Media England’s exams regulator, Ofqual, says it warned the government of the risk of widespread dissatisfaction with its emergency grading system.Chairman Roger Taylor told MPs there were good reasons to attempt it, including fairness between schools and continuity from year to year.But he said other options could have been used, such as…

England’s exams regulator, Ofqual, says it warned the government of the risk of widespread dissatisfaction with its emergency grading system.

Chairman Roger Taylor told MPs there were good reasons to attempt it, including fairness between schools and continuity from year to year.

But he said other options could have been used, such as delaying exams or schools could have issued certificates.

Many A-levels were downgraded after schools’ estimates were standardised.

Labour accused England’s Education Secretary Gavin Williamson of trying to blame Ofqual for failings with replacement results for cancelled exams – but it was “now clear he was responsible”.

At Prime Minister’s Questions, Labour leader Sir Keir Starmer challenged Boris Johnson over when did he “first know that there was a problem with the algorithm?”

Mr Johnson defended his government’s record, saying “we did institute a change, we did act” and students did get their grades

Mr Taylor, who was giving evidence to the Commons Education Select Committee, defended Ofqual’s approach to calculating grades for exams cancelled by the pandemic, saying it was trying to carry out ministerial guidelines.

He argued that using a standardised model would on the whole be likely to help disadvantaged pupils.

But after problems and inconsistencies emerged with grades, the moderation process was ditched in a U-turn, and teachers’ grades were used instead.

The chief regulator, Sally Collier, resigned and the Department for Education’s most senior civil servant, Jonathan Slater, stepped down following the exams chaos.

The Ofqual chairman told MPs that he and other officials had repeatedly warned the Department for Education of risks in the system.

Julie Swann, Ofqual’s executive director for general qualifications, said a paper on May 1 “highlighted the risk of widespread dissatisfaction” with the grades to be awarded from students, schools and colleges.

Mr Taylor, also revealed Ofqual guidance on using “valid mock” exam results to widen the appeals process, was removed from the Ofqual website after an intervention from England’s education secretary.

Mr Williamson had decided to allow what he described as “valid mocks” to be used in appeals, after a standardisation process – using a now discredited algorithm that had lowered around 40% of A-levels from the grades submitted by teachers.

Ofqual had been trying to formulate a way for such appeals to work, while meeting its statutory duty to ensure exams were fair.

Mr Taylor said the board then met in emergency session to try to find a way through a situation which was rapidly “spinning out of control”.

“We advised the Secretary of State at this point that we could not be confident that this could be delivered within the statutory duties of Ofqual to ensure that valid and trustworthy grades were being issued.”

Discussions followed throughout Sunday, in which it became clear that a move to “centre assessed grades”, which had been submitted by schools and colleges, was all but inevitable.

Mr Williamson went on to announce that results would use these centre assessed grades in a major U-turn.

The Ofqual chairman told MPs they had been consulted by the Department for Education on the implications of cancelling exams back in March.

At this point, Ofqual said there were four options:

Mr Taylor said Mr Williamson made the announcement that exams were being cancelled without coming back to Ofqual.

The committee heard Ofqual had been concerned that many students would be upset with their grades, as they had not sat any examination and the regulator thought it would be very difficult to win public support for the replacements.

On the algorithm used for grades, this was developed by Ofqual working with technical experts from the exam boards.

When asked when it “mutated” by committee member Ian Mearns, in reference to prime ministers Boris Johnson’s description of it to students last week, Ms Swan said it had not.

Mr Taylor insisted standardisation via the algorithm was fairer to candidates from disadvantaged backgrounds, and his officials said its accuracy had been shown to be 90% in testing.

He added: “Once the decision has been taken to cancel exams, it’s very difficult to find a solution.”