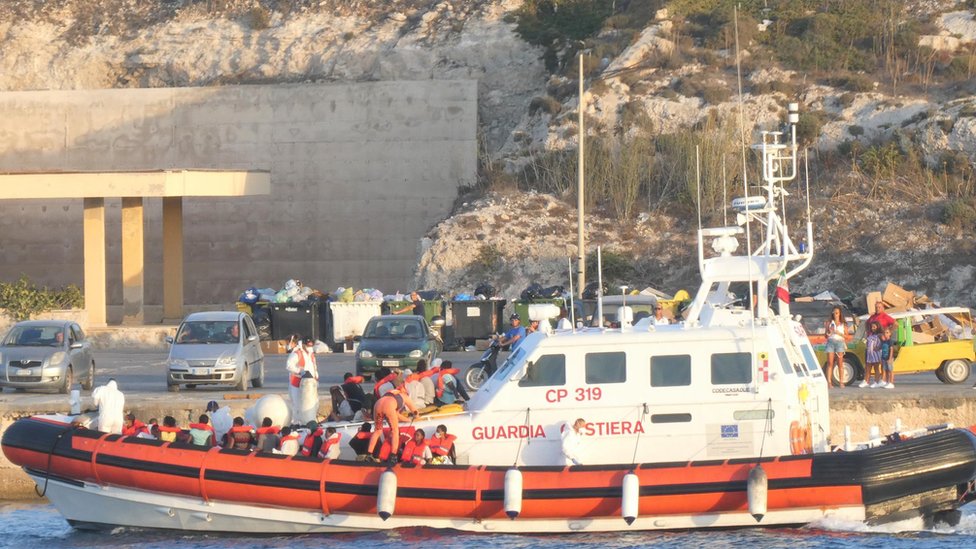 Publishedduration2 hours agoimage copyrightEPAimage captionOfficials say Lampedusa is experiencing an increase in migrant arrivalsA migrant woman who tested positive for coronavirus has given birth on board a helicopter while being airlifted to hospital from an over-crowded holding centre on Italy’s Lampedusa island.Italy says it has seen an increase in migrant arrivals this year.A rescue ship…

A migrant woman who tested positive for coronavirus has given birth on board a helicopter while being airlifted to hospital from an over-crowded holding centre on Italy’s Lampedusa island.

Italy says it has seen an increase in migrant arrivals this year.

A rescue ship was given permission on Tuesday to disembark 353 rescued migrants on the island of Sicily after calls from the United Nations.

Meanwhile, a tanker with 27 migrants on board has made fresh pleas for help.

The commercial vessel, Maersk Etienne, says it rescued the migrants following a request by Malta in early August but has since been left at sea. Its crew say they are “desperate”.

What happened on Lampedusa?

The woman had tested positive for coronavirus when she went into labour.

She was being housed at a migrant holding centre that was about 10 times over capacity, Reuters news agency reports.

Officials said they decided to transfer her to a hospital in the Sicilian capital of Palermo – a one-hour flight away – so she could give birth in safety. But she gave birth mid-way through the flight.

The woman – who has not been identified – is now in hospital in Palermo along with her baby.

The incident came amid clashes between the Sicilian and national government, with Sicily’s Governor Nello Musumeci accusing Rome of not giving him enough help in dealing with migrant arrivals from Africa.

Some 19,400 migrants have landed on Italy’s shores so far this year, compared to around 5,200 in the same period last year, according to official data cited by Reuters.

The UN says slightly more than 40,000 people have arrived in Europe by sea in 2020 and 443 people have died or have gone missing trying to cross the Mediterranean from north Africa.

What about those stuck at sea?

The UN Refugee Agency on Saturday called for hundreds of migrants and asylum seekers stuck on ships in the Mediterranean to be allowed to disembark safely.

In a joint statement with the International Organization for Migration, it said it was a “humanitarian imperative to save lives”.

The NGO rescue ship Sea Watch 4 said some 353 migrants on board were given permission on Tuesday to disembark in Palermo. They will first be transferred to a ship for quarantine, it said.

A commercial oil tanker carrying 27 migrants, including a pregnant woman and at least one minor, remains at sea and is calling for “urgent humanitarian assistance and a safe disembarkation.”

The Danish-flagged Maersk Etienne says it rescued the migrants on 5 August at the request of Maltese authorities, but has since been left at sea.

“It’s been a long time now, 27 days today since we were called by the Maltese authorities to pick up these 27 migrants,” Tommy Thomassen, the chief technical officer of the ship’s operator Maersk Tankers told the BBC.

“We are in a desperate situation and we are crying out for help to the international community,” he said.

Mr Thomassen said the tanker was “neither designed nor equipped” to carry the migrants, who have been sleeping on the deck.

“The crew have done their best to make life as acceptable as possible but it’s not conditions you can offer anyone for this extended period of time,” he said.