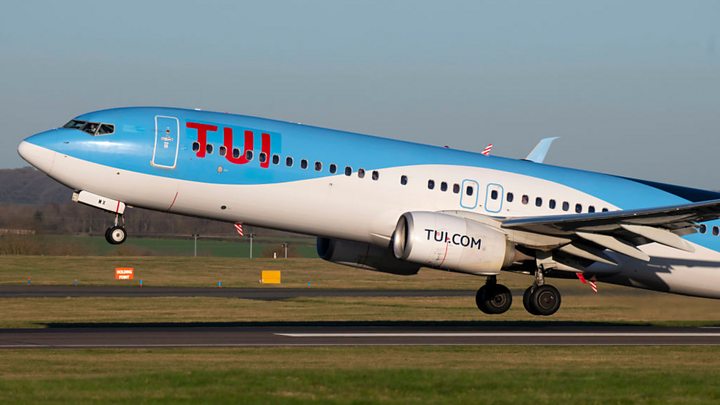 Media playback is unsupported on your device Media captionTravel expert “very, very concerned” about Zante to Cardiff coronavirus flight Travel company Tui has cancelled all holidays to a party resort on a Greek island because of customers failing to follow coronavirus safety measures.Tui said it would no longer be offering trips to the resort of…

Travel company Tui has cancelled all holidays to a party resort on a Greek island because of customers failing to follow coronavirus safety measures.

Tui said it would no longer be offering trips to the resort of Laganas, on Zante, from Thursday.

It comes after six clusters of cases were linked to flights from the island.

The UK government is under pressure to reconsider England’s quarantine rules for Greece, after both Scotland and Wales introduced their own measures.

The Scottish government announced all travellers arriving from Greece would be asked to self-isolate for 14 days after 04:00 BST on Thursday, while Wales’ health minister has asked those arriving from Zante to quarantine.

Andrew Flintham, managing director of Tui UK and Ireland, said anyone who had booked to go Laganas after 3 September would be refunded for the cancellation, but that trips to all other resorts on Zante would continue as normal.

“Laganas is a popular resort with young people who traditionally holiday in large groups of friends,” he said.

“The health and safety of our colleagues and customers is our primary concern and recent cases shows that some customers are not following social distancing and Covid safety measures.

“It is therefore the right thing to do to protect and reduce a now identified potential risk to others by no longer offering holidays to this specific resort.”

Nearly 200 people faced self-isolation after at least 16 passengers on a Tui flight from Zante to Cardiff Airport tested positive for the virus. Some people claimed passengers were not following Covid-19 rules.

Wales’ Health Minister Vaughan Gething said there were six clusters of cases, amounting to more than 30 infections, linked to flights from the Greek island in the past week – including two flights which landed in England.

Mr Gething called on the UK government to agree to meeting the devolved nations on Wednesday to urgently discuss removing Greece from the nations’ quarantine exemptions lists. The meeting usually goes ahead on Thursdays.

His comments came shortly after the Scottish government announced its own decision.

When a country surpasses 20 cases per 100,000 people in the past week, the UK government normally imposes 14 days of self-isolation on returning travellers.

There were 14.0 coronavirus cases per 100,000 people in Greece in the seven days to 31 August, down from 14.9 a week earlier. But several cases of the virus in Scotland have been traced back to Greece, including a passenger on a Tui flight from Zante to Glasgow on 23 August.

Tui said customers due to travel to Greece from Scotland would be able to amend or cancel their holiday in light of the quarantine announcement.

Meanwhile, ministers are considering reimposing quarantine measures for those arriving in the UK from Portugal as coronavirus cases rise, sources have told the BBC.

It has been less than two weeks since a travel corridor was established between Portugal and the UK, following a sustained period of falling cases in the country that put it below 20 cases per 100,000 people.

But holidaymakers are scrambling to return from Portugal amid fears the country is about to be taken off the list.

As of 1 September, the UK recorded 25.0 coronavirus cases per 100,000 people over the past fortnight while Portugal recorded 36.7, according to the European Centre for Disease Prevention and Control.

Every year, more than two million Britons visit Portugal, making up the largest number of overseas tourists to the country.

Over May and June, the Portuguese government reopened its restaurants, coffee shops, museums and beaches. Hotels have mainly reopened, but nightclubs remain closed.

The government has not commented on whether requirements for arrivals from Portugal will change again.

Last week, Switzerland, Jamaica and the Czech Republic joined France, Spain and other destinations on the UK’s quarantine list.