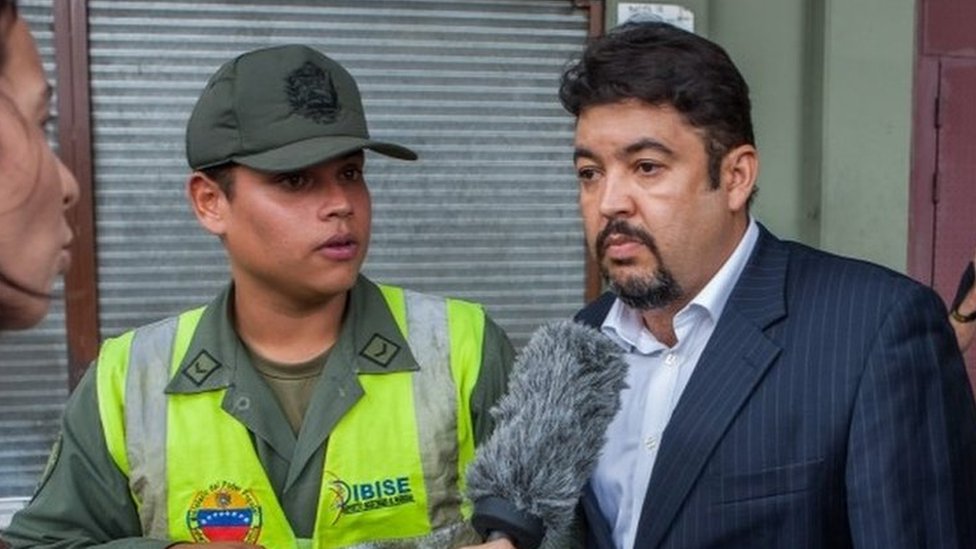 Publishedduration3 hours agoimage copyrightEPAimage captionJuan Guaidó’s chief of staff, Roberto Marrero, was among those releasedThe Venezuelan government announced on Monday it would free 110 political opponents, some of whom have been in detention for months.Communications Minister Jorge Rodríguez said President Nicolás Maduro had issued a decree to that effect which would come into force immediately.The…

The Venezuelan government announced on Monday it would free 110 political opponents, some of whom have been in detention for months.

Communications Minister Jorge Rodríguez said President Nicolás Maduro had issued a decree to that effect which would come into force immediately.

The move comes three months before legislative polls which many opposition parties say they will boycott.

But Mr Maduro’s most vocal critics are not among those listed in the decree.

Who is being ‘pardoned’?

Among the names read out by Mr Rodríguez are some well-known opposition politicians and activists whose arrests caused outrage at the time.

Many have close links to Juan Guaidó, the leader of Venezuela’s opposition-controlled National Assembly and Mr Maduro’s main rival.

Mr Guaidó is recognised by more than 50 countries as Venezuela’s legitimate leader after the elections which returned Mr Maduro to power in 2018 were widely denounced as neither free nor fair.

Among those named in the decree are:

Noticeably absent from the list is Leopoldo López, the leader of the Popular Will party, who led anti-government protests in 2014 before being sentenced to almost 14 years in prison for inciting violence.

Mr López was later moved from jail to house arrest. In April 2019 – after being freed by sympathetic guards – he joined Mr Guaidó in an attempted uprising, in which the two politicians tried to sway Venezuela’s military to switch allegiance.

After the uprising failed, he sought refuge at the residence of the Spanish ambassador in Caracas, where he has been living since.

The decree said the judicial authorities should act straight away to ensure the release of those still behind bars.

But some of those on the list of names are not in jail but have been either living abroad to avoid detention or have sought refuge in foreign embassies. Mr Guanipa, for example, is in neighbouring Colombia, Freddy Guevara is living in the residence of the Chilean ambassador to Caracas and Miguel Pizarro is outside of Venezuela.

It is not clear yet whether they will leave the places where they have sought refuge.

What’s behind the move?

Communications Minister Jorge Rodríguez said the “pardon” was “in the interest of promoting national reconciliation” in Venezuela.

It comes just days before a deadline for parties to register for the legislative elections scheduled for 6 December.

In the election, voters will choose the members of the National Assembly, the only institution in Venezuela currently controlled by the opposition.

Most of the opposition parties have said that they will boycott the polls because they are convinced they will be rigged so that President Maduro’s PSUV party gains control of the National Assembly.

Political analysts in Venezuela have speculated that the move may be an attempt by the government to coax those boycotting the election to take part after all, and therefore grant the election the legitimacy it would lack were the opposition boycott to go ahead.

Others see in it an attempt to minimise the criticism from abroad that the Venezuelan government has come under for jailing so many opponents.

What’s the reaction been?

While some of those freed have expressed their relief at leaving often deplorable jail conditions, some have balked at the decree being described as a “pardon”.

They have pointed out that many of those in detention were never even charged and therefore cannot be pardoned for something they were not found guilty of. Others were arrested even though they should have been protected by parliamentary immunity from prosecution as serving lawmakers.

Many in the opposition fear President Maduro’s decree comes “with strings attached” and that the opposition politicians released will be pressured to take part in the legislative elections with the implied threat that they could be returned to jail if they do not comply.

Mr Guaidó accused the government of using those on the list as “pawns”. “Why is the dictatorship doing this? This has happened before: they free them to try to legitimise the manoeuvres of the moment… It is a trap and we are not going to fall into it,” he tweeted.

Others think the move is an attempt to silence international critics, such as the United Nations High Commissioner for Human Rights Michelle Bachelet, who have repeatedly called on the Venezuelan government to release all political prisoners.

The government insists the “pardon” is a gesture of good will with President Maduro calling it “a moment of reconciliation and profound dialogue” in Venezuela.