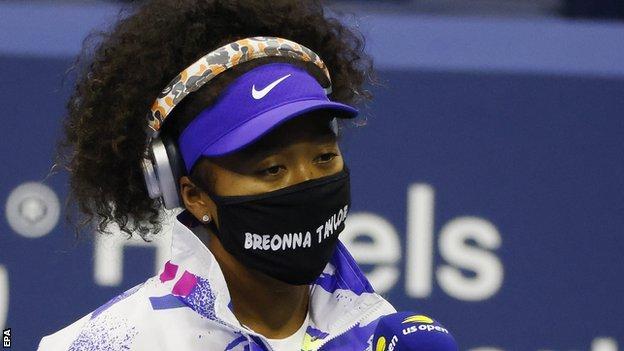 Naomi Osaka walked out on court wearing a face mask with the name of Breonna Taylor, a black woman who was shot dead by a policeman in March in the United StatesVenue: Flushing Meadows, New York Dates: 31 August – 13 SeptemberCoverage: Selected radio and text commentaries on BBC Radio 5 Live and the BBC…

Fourth seed Naomi Osaka overcame a scare to beat fellow Japanese player Misaki Doi in three sets and avoid a major shock in the US Open first round.

Osaka, who won the first of her two Grand Slams at Flushing Meadows in 2018, wobbled in the second set before recovering for a 6-2 5-7 6-2 victory.

Osaka, 22, withdrew from the Western and Southern Open final on Saturday with a left hamstring injury, saying afterwards she was “stressing” about her fitness going into the Grand Slam.

During Monday’s less-than-convincing win over 81st-ranked Doi, she did not wear any strapping or need medical treatment.

“It was difficult [physically]. I knew there was a chance it would get really long. I will have to see what happens tomorrow and how I feel,” Osaka said.

The former world number one struggled with her first serve in the early part of the match, landing only 38% as Doi took control in the second set and threatened to level the match.

But Osaka switched gears with a decider looming, finding more power and precision with her serves and returns to fight back from 5-2 down to level at 5-5.

Osaka was unable to take any of her three break points for a 6-5 lead before the momentum swung back to Doi, who broke on her second set point through Osaka’s 20th unforced error.

However, Osaka increased her level again at decisive moments. She broke in the opening game of the decider, and again for a 5-2 lead, to come through in two hours and three minutes.

Osaka walked out on court wearing a face mask with the name of Breonna Taylor, a black woman who was shot dead by a policeman in the United States in March.

Asked about it in her on-court interview, she said: “I have seven. It is quite sad seven masks isn’t enough for the amount of names – and hopefully I’ll get to the final and you will see all of them.”

She later added in a news conference: “For me, I just want to spread awareness. I’m aware that tennis is watched all over the world but that maybe there is someone who doesn’t know Breonna Taylor’s story. Maybe they’ll Google it after or something.

“I feel the more people know this story the more interested they will become in it.”

Osaka initially pulled out of her Western and Southern Open semi-final last week as a protest against racial injustice.

Tournament organisers then suspended play in New York on Thursday, one of a number of sporting events in the US to do so in protest at the shooting of Jacob Blake – a black man who was shot seven times in the back by police on 23 August in Kenosha, Wisconsin.

World number 51 Gauff reached the third round at her home Grand Slam in 2019, soon after making Wimbledon’s last 16.

But the 16-year-old American, who had backed up last year’s promise by reaching the fourth round at January’s Australian Open, could not reproduce that form against a relentless Sevastova, 30.

A second-set resurgence looked to put Gauff on track for victory against the Latvian but she lost 6-3 5-7 6-4.

Sevastova – a semi-finalist in 2018 and two-time quarter-finalist – overcame her frustration at narrowly losing the second set after the pair continually exchanged breaks. She surged ahead at 5-4 up in the third to break Gauff’s serve and claim victory.

Gauff was let down by a huge 13 double faults and went out when she netted a return to make her first opening-round exit from a Grand Slam tournament.

Pliskova, who is aiming to land her first Grand Slam title, made a confident start to her campaign in New York with a 6-4 6-0 win over Ukraine’s Anhelina Kalinina.

The 28-year-old Czech, who is top ranked in the absence of Ashleigh Barty and Simona Halep, faces France’s Caroline Garcia next.