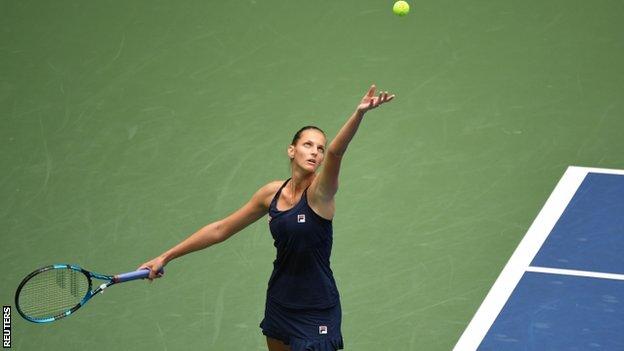 World number three Karolina Pliskova was runner-up in the 2016 US OpenVenue: Flushing Meadows, New York Dates: 31 August – 13 SeptemberCoverage: Selected radio and text commentaries on BBC Radio 5 Live and the BBC Sport website, plus daily reports and analysisTop seed Karolina Pliskova made a confident start to her US Open campaign with…

Top seed Karolina Pliskova made a confident start to her US Open campaign with a 6-4 6-0 win over Ukraine’s Anhelina Kalinina in New York.

The Czech, 28, recovered from dropping serve in the first game to later string together eight games in a row, needing just 21 minutes to take the second set.

Pliskova, top-ranked in the absence of Ashleigh Barty and Simona Halep, faces France’s Caroline Garcia next.

Also through are ex-Wimbledon champions Petra Kvitova and Angelique Kerber.

Other women in action on day one at Flushing Meadows – where the tournament is being held behind closed doors – include Japan’s 2018 champion Naomi Osaka and American teenager Coco Gauff.