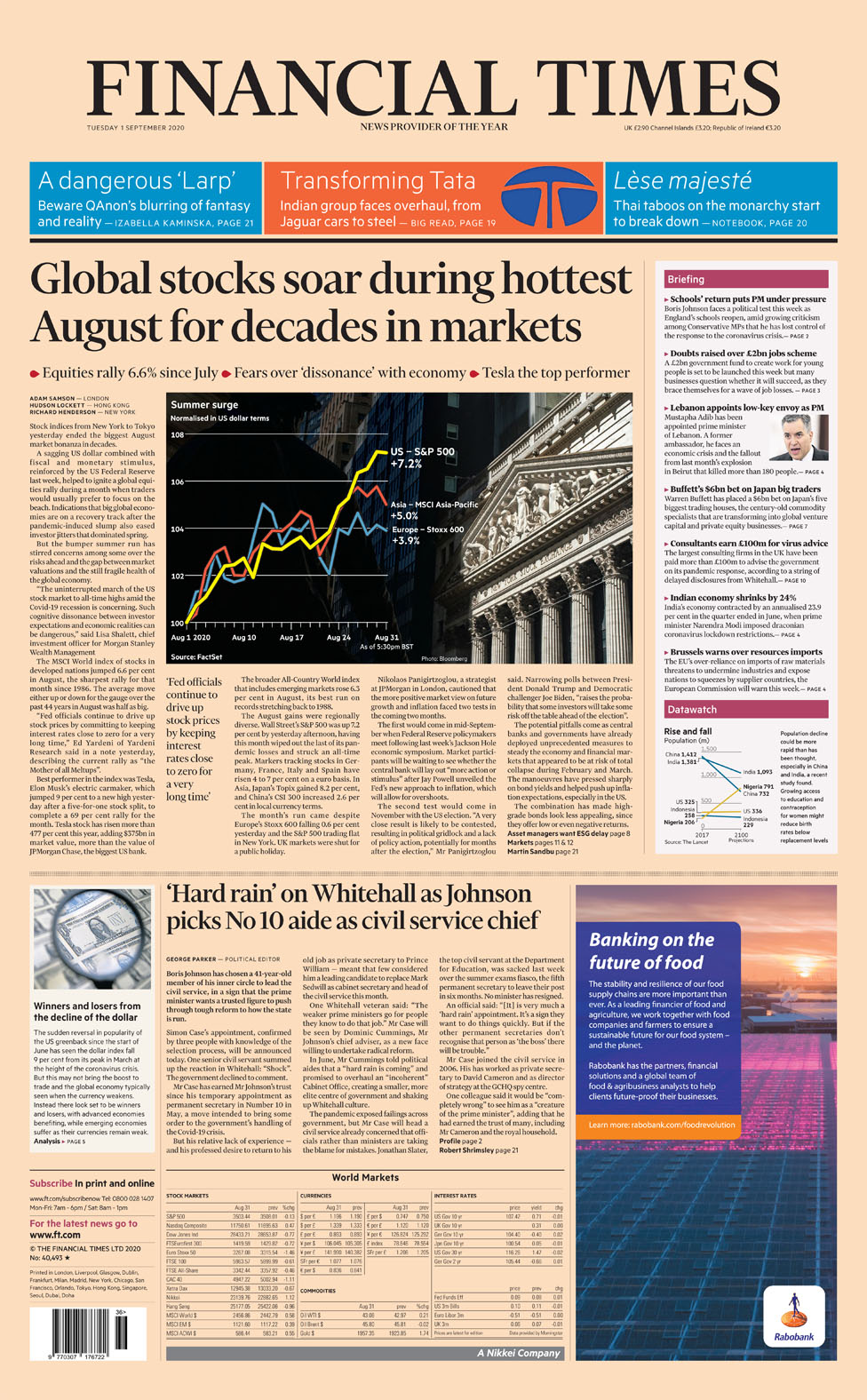 By BBC NewsStaffPublishedduration3 hours agoimage captionAs schools in England and Wales return for the autumn term, the Metro quotes a senior Conservative MP as saying there is just a 50% chance that next year’s A-level and GCSE exams will go ahead. The paper says pupils face a “monumental challenge to catch up” as a result…

tells the Daily Telegraph that this week’s full reopening of schools in England and Wales brings “fresh hope” after a challenging few months.

He says ensuring “no child is left behind” is a “national priority” and urges the “whole nation to get behind them”.

The Daily Mirror says Labour leader Sir Keir Starmer is demanding Mr Williamson set out a “proper plan” to protect pupils and ensure they can recover their lost education.

The Guardian and the Daily Star reveal children face being sent home from school if they breach strict new “coronavirus red lines”, which include deliberately coughing or sneezing on someone, or even pretending to as a joke. The Star is highly critical of the idea of suspending children when they’ve “already missed too much valuable teaching time”.

The Financial Times regards the return to schools as a “crucial political test” for Prime Minister Boris Johnson, who it says is facing “growing criticism that he has lost his grip”.

The paper says the prime minister needs the reopening to go smoothly to pave the way for workers to go back to their offices.

The Times has “disappointing news” for those who’ve been enjoying home working: they have been putting in about an hour a day more than before lockdown.

“Fears that people are lounging about in their pyjamas and getting little done may be unfounded,” the paper says.

It highlights a report by the National Bureau of Economic Research which found that home workers spend an average of 49 minutes longer at their desks – and attend more meetings.

The Independent digital newspaper says the government spent more than £120m fighting disability benefit claims in the past two years, but lost three-quarters of appeals at tribunal. Labour and disability campaigners express alarm at the amount of public money being used to fight such cases.

The Department for Work and Pensions responds that complaints about the way it assesses claims dropped by a quarter over that period, and insists it’s “committed to helping people get the support they are entitled to”.

As the BBC’s new director general, Tim Davie, takes over, the Daily Express and the Daily Mirror warn that he faces a pensioners’ revolt unless he brings back free TV licences for the over-75s.

The Silver Voices campaign group says many pensioners plan to stop paying or spoil their cheques in protest – and urges Mr Davie to work with the government to find a compromise.

One option he’s said by the Guardian to be considering is a Swedish-style tax, which would be reduced for those on lower incomes.

Hackers are reported to be targeting virtual festivals, which have been “a godsend” for music lovers during lockdown. The Guardian says fraudsters are setting up fake pages to charge users to access live streams that should be free to view.

And the Sun offers a luxury gift idea that’s not to be sniffed at: a “huge designer candle that smells of the River Thames near Dagenham”. The item – with its additional notes of “red bricks and nettles” – is on sale at the department store Selfridges for £450.