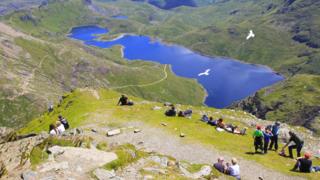 Image copyright Getty Images Image caption Snowdon is the highest peak in Wales at 1,085 metres and is also higher than any in England About 200 bags of rubbish have been collected on Snowdon in two months, volunteers say. Rubbish “hotspots” such as the Llanberis Path, the summit itself and area around Llyn Ogwen, have…

About 200 bags of rubbish have been collected on Snowdon in two months, volunteers say.

Rubbish “hotspots” such as the Llanberis Path, the summit itself and area around Llyn Ogwen, have been targeted by the Snowdonia Society charity.

About 600,000 people a year climb Wales’ highest peak but the group says many do not take their litter home.

They believe the answer is better education not more bins.

“We [speak to visitors] on Fridays, Saturdays and Sundays and we still find lots of litter the day after – so it’s only had a night and a morning to gather and yet we are still seeing large numbers of litter,” said Dan Goodwin, from the Snowdonia Society, a charity which helps maintain the peak and surrounding area.

Regular finds include nappies, human waste and banana skins. Mr Goodwin added: “People are still unaware of the problem of how long banana peel lasts on the mountain.

“We’re talking about two years for that to completely break down. People who drop banana skins would never dream of dropping a plastic bottle.”

He said more bins were not the answer and people should instead be educated to bring down what they take up the mountain.

Judy Boddington, who lives in the Conwy Valley and spent Bank Holiday Monday clearing up rubbish, said: “Quite frankly, it’s heart-breaking to see the rubbish left.

“There are animals here, as well as people, and it’s just such a shame that they destroy the local environment.

“How would they like it if we went and dumped rubbish out where they lived?”