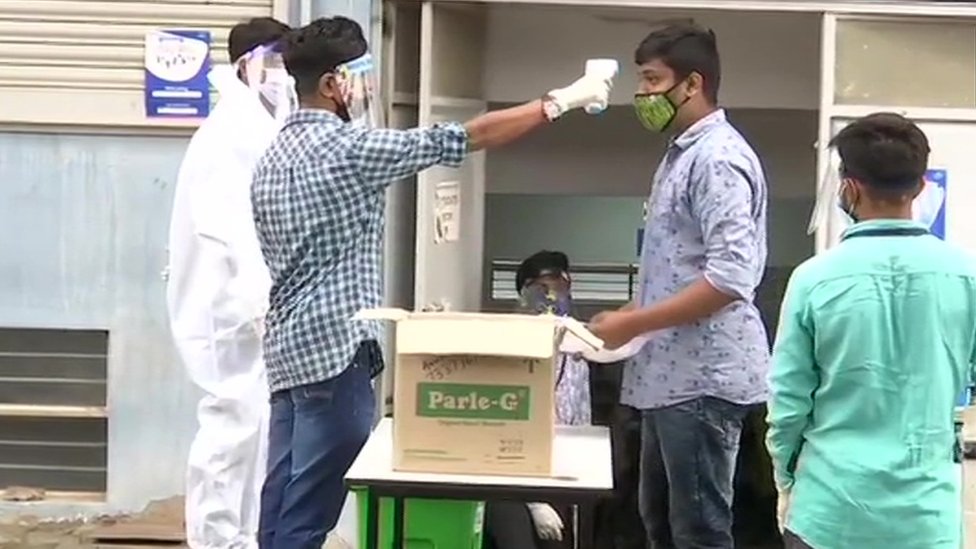 Publishedduration2 hours agoimage copyrightANIimage captionMore than 850,000 students are taking the testOne of India’s most competitive college exams – which determines the fate of millions – is starting on Tuesday, amid protest and fear over rising Covid-19 cases. For weeks, many students have campaigned to delay the exam.Social media has been awash with pleas to…

One of India’s most competitive college exams – which determines the fate of millions – is starting on Tuesday, amid protest and fear over rising Covid-19 cases.

For weeks, many students have campaigned to delay the exam.

Social media has been awash with pleas to delay the test and students have even taken their concerns to court.

But the National Testing Agency (NTA), which conducts the exam, has refused to reschedule it.

The Supreme Court also dismissed the students’ plea earlier, saying that “ultimately life has to go on and the career of the students cannot be put on peril for long and a full academic year cannot be wasted”.

The JEE (Joint Entrance Examination) determines admission into engineering colleges and it will go on until 6 September. More than 850,000 students will take the exam at 660 centres across India.

Some 2.5 million students are expected to sit for both tests this year.

Students have heavily protested against both.

The NTA says it has already moved the exam dates several times this year due to the pandemic – and the tests cannot be put off any longer.

It has also detailed the elaborate safety measures it is taking, including sanitising the examination centres before and after the exams, providing gloves and masks, temperature checks, staggered entry and social distancing.

Some of the students said that sitting for the exams during such an unprecedented time will make them anxious, further adding to their mental strain.

But there are also students who don’t want the exams to be delayed, saying they have been preparing for the last two years and don’t want to face any more uncertainty.

A week after students petitioned the Supreme Court, another group of students appealed to the court to let the exams continue as per schedule.

India’s politicians have also weighed in on the debate, with opposition parties rallying behind the students who want to push the exams to a later date. Six states, ruled by opposition parties, moved the top court last week to delay the exams.