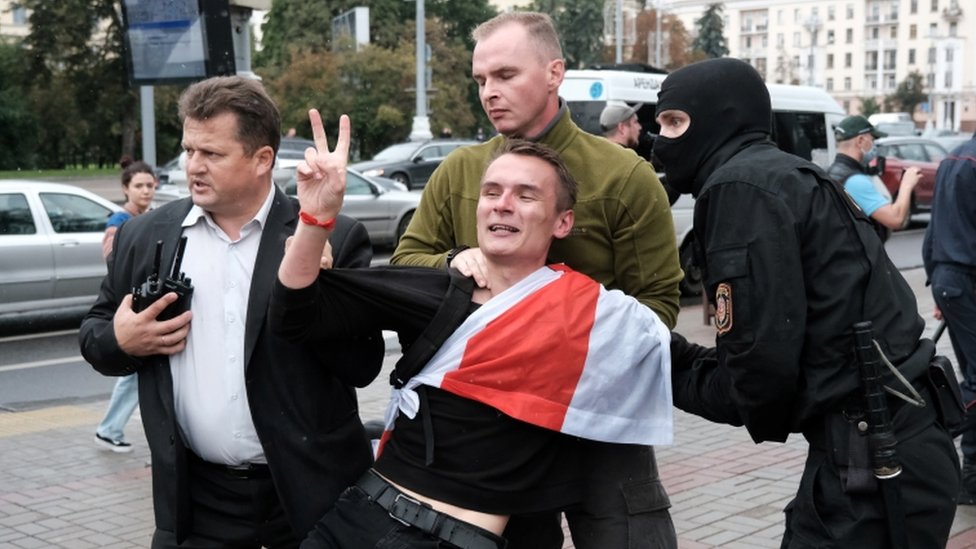 Publishedduration3 hours agoimage copyrightReutersimage captionStudents from a number of Minsk-based universities took part in Tuesday’s marchesBelarus police have detained a number of students as they marked the start of the academic year with protests against long-time leader Alexander Lukashenko.Columns of students from universities in the capital Minsk marched along Independence Avenue and gathered in Victory…

Belarus police have detained a number of students as they marked the start of the academic year with protests against long-time leader Alexander Lukashenko.

Columns of students from universities in the capital Minsk marched along Independence Avenue and gathered in Victory Square.

Mr Lukashenko, who has been in power for 26 years, insisted he had the support of millions of Belarusians.

“I don’t want my country to be cut into pieces,” he said.

If “alternative forces” came to power there would be “slaughter – much worse than what happened in Ukraine”, he was quoted as saying by the state-run Belta news agency.

Meanwhile, one of the leading opposition figures in Belarus, Maria Kolesnikova, has announced she is forming a new party called “Together”.

Students on the march

Protests against Mr Lukashenko’s rule have continued across Belarus since the 9 August presidential election, which was widely regarded as rigged, and rejected by the EU and US as neither free nor fair.

Thousands of students marked the first day of term on Tuesday by going on strike and taking to the streets in support of the protests, many carrying the historic Belarusian white-red-white flag used by the opposition.

“We came to support the people, to show our political stance and demonstrate that there is no need to stay at home, to be afraid,” said one student.

A BBC team witnessed riot police attacking and forcibly arresting one group of students marching near one of the main squares in the capital. Two Belarusian journalists were among those detained.

Belarusian authorities were widely accused of using brutality against protesters in the immediate aftermath of the August vote. In recent days they have begun cracking down again, turning out in force during Sunday’s demonstrations. Seventeen journalists, most of them Belarusian citizens, have lost their accreditation. Two work for the BBC.

Omon riot police and officers in plain clothes tried to get the students to disperse, but students also tried to block the entrances to several universities.

A woman was seen being bundled into a car as she tried to collect signatures demanding a new vote, human rights group Viasna reported.

Independent website Tut.by reported that teachers were among the protesters who formed a chain outside the state academy of the arts.

How is Lukashenko responding?

On a visit to a college in western Belarus, he urged older people to explain to younger Belarusians about the hardships that the country had overcome. “They didn’t see it, you should talk to them,” he was quoted as saying by Belta news agency.

Election authorities gave him 80% of the 9 August vote, but leading opposition candidate Svetlana Tikhanovskaya has insisted she won 60-70% based on results that had been properly counted.

Ms Tikhanovskaya herself only entered the race when her husband was arrested and blocked from registering as a candidate. She was detained the day after the vote and went into exile in Lithuania immediately afterwards.

The main opposition figure still in Belarus, Maria Kolesnikova, announced late on Tuesday that she was launching a new party along with jailed former presidential hopeful Viktor Babariko. Belarus was in political, social and economic crisis, and “together we know how to get out of this crisis”, she said.

Ms Kolesnikova has been a powerful presence throughout the anti-Lukashenko protests. During Sunday’s rally, she tried to enter the presidential palace to talk to the Belarusian leader but was told he would not negotiate with the opposition.

His spokesman distributed a picture showing Mr Lukashenko outside the palace brandishing a gun and wearing military fatigues.

Belarusian authorities have recently targeted the opposition National Co-ordination Council, which was set up by Ms Tikhanovskaya to handle the transfer of power and includes figures from across society.

Legal mediator Lilya Vlasova, 67, was detained after a search of her home on Monday. She’s the third council member to be held. Another member, Nobel literature laureate Svetlana Alexievich, was questioned last week, but as a witness.