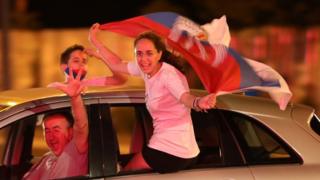 Image copyright Reuters Image caption Opposition supporters celebrated in the capital Podgorica Opposition parties in Montenegro have between them won a wafer-thin majority in the ex-Yugoslav country’s election, official results suggest. The pro-Western party of long-serving president Milo Djukanovic won most of the vote on Sunday but fell one seat short of a majority.His Democratic…

Opposition parties in Montenegro have between them won a wafer-thin majority in the ex-Yugoslav country’s election, official results suggest.

The pro-Western party of long-serving president Milo Djukanovic won most of the vote on Sunday but fell one seat short of a majority.

His Democratic Party of Socialists (DPS) has been in power for 30 years.

With nearly all the votes counted, there is a possibility the opposition could form a technocratic government.

The Democratic Front (DF) is the largest opposition party but its right-wing policies and close relations with Serbia and Russia are not shared by other parties.

President Djukanovic says he and his party will respect the results and the “free democratic will” of Montenegro’s people but will wait for the final outcome.

What bolstered the opposition?

Divisions over the powerful Serbian Orthodox Church dominated the campaign.

There have been months of protests since a law was adopted in December allowing the state to seize religious assets when their historical ownership could not be proven.

The Church urged people to vote against the DPS.

Montenegro remained allied in a union with Serbia until 2006 – long after the former Yugoslavia dissolved into independent states.

In more recent years, he was instrumental in securing Montenegro’s accession to Nato in June 2017 and has been leading ongoing efforts to gain membership to the European Union.

Montenegrins who identify as ethnic Serbs account for about a third of the country’s 630,000 population, according to the latest census data.

And as the majority of Montenegrins are members of the Church, its influence is considerable.

The opposition has accused Mr Djukanovic and his party of having links to organised crime and running the country as an autocracy.

Mr Djukanovic has denied this and says the opposition, with the backing of Russia and Serbia, is seeking to undermine the country’s independence.

During the previous parliamentary vote in 2016, authorities said they had thwarted a planned coup orchestrated by Russian agents and a group of Serb nationalists.

A court in Montenegro last year handed five-year jail terms to two pro-Russian opposition politicians it found to be involved in the plot.

Russia called the inquiry absurd and Montenegro’s opposition called it a “false-flag” operation – a fake act aimed at incriminating an opponent – to keep Mr Djukanovic in power.

A blow for Djukanovic

This result could still play out in a number of ways. But it certainly represents a blow for Montenegro’s president, Milo Djukanovic.

He was not standing for election himself – but he was still very much the face of his Democratic Party of Socialists during the campaign. And it was his decision to pick a fight with the Serbian Orthodox Church which gifted his opponents the chance to declare that they really did have God on their side.

The Church’s involvement may have encouraged the high turnout of more than 75%. And many voters appear to have listened to the bishops’ advice to vote for opponents of a government which passed legislation making it possible for the state to claim Church property.

This has opened the door to the possibility of Montenegro’s first-ever transfer of power via the ballot box. There would be concerns about the pro-Russian, Serbian nationalist elements among the parties opposing the DPS if they managed to form a governing coalition. But a change of government after almost 30 years would send the world a message about Montenegro.

After all, the US human rights organisation, Freedom House, downgraded Montenegro from a democracy to a “hybrid regime” earlier this year. And if nothing else, the turnout and result offer an eloquent riposte.