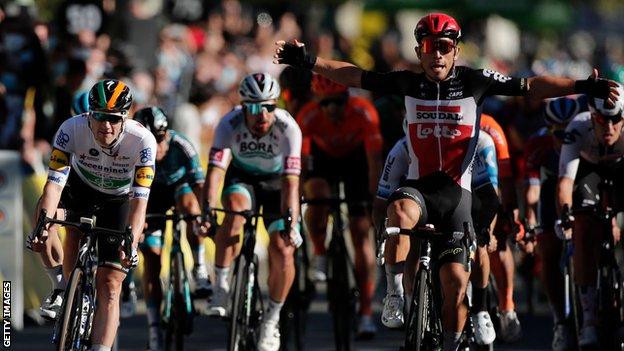 Caleb Ewan has won stages in all three Grand ToursCaleb Ewan produced a dazzling sprint finish to win stage three of the Tour de France as Julian Alaphilippe held on to the yellow jersey.The Australian Lotto Soudal rider timed his sprint perfectly into a strong headwind in Sisteron to squeeze past Peter Sagan and snatch…

Caleb Ewan produced a dazzling sprint finish to win stage three of the Tour de France as Julian Alaphilippe held on to the yellow jersey.

The Australian Lotto Soudal rider timed his sprint perfectly into a strong headwind in Sisteron to squeeze past Peter Sagan and snatch victory from Irishman Sam Bennett.

It is his fourth Tour stage win after three victories on his debut last year.

“The guys did a great job keeping me at the front,” said Ewan.

“This is the biggest race in the world and I’m so happy to get another win and prove last year wasn’t a fluke. I hope to keep coming back and keep winning.”

Ewan displayed excellent bike handling skills to navigate a chaotic finish, and avoid the headwind that penalised his rivals, until the last moment.

The 26-year-old narrowly avoided Sagan’s back wheel and the right-hand side barrier to get onto Bennett’s wheel before he kicked clear with tremendous speed at 50m to go.

“I was a bit too far forward in the final kilometre so I dropped back and gave myself a bit of a rest,” he added.

“Coming from behind is a bit of a risk but I got through past the barrier and had the speed in the end.”

Former three-time world champion Sagan faded to finish fifth but picked up enough points to replace stage one winner Alexander Kristoff in the green points jersey, which the Slovakian is aiming to win for a record-extending eighth time.

It was a high-speed finish after a largely sedate day, with France’s Jerome Cousin spending 110km off the front alone before he was swept up by the peloton with 16km to go.

Cousin had been in a breakaway with compatriots Benoit Cosnefroy and Anthony Perez, who were battling for king of the mountains points.

Perez had taken the virtual lead off Cosnefroy in that classification but was then forced to abandon the race with a broken collarbone after he punctured on a descent and crashed into his Cofidis team car.