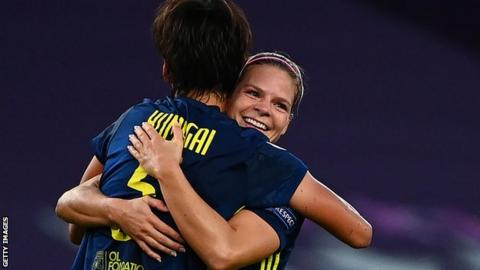 Lyon won the Women’s Champions League for a fifth consecutive year as they beat Wolfsburg 3-1 in San Sebastian.

France’s Eugenie le Sommer opened the scoring and Japan’s Saki Kumagai lashed in to put Lyon 2-0 up at half-time.

Alexandra Popp headed in for Wolfsburg after the break but Sara Bjork Gunnarsdottir’s late third sealed it.

Bronze, who had previously said this would be her last game for Lyon, confirmed after full-time she was likely to move to the Women’s Super League, but would not be drawn on whether her former club Manchester City would be her next destination after her contract ends on Monday.

Her England team-mates Jodie Taylor and Alex Greenwood both came on as substitutes for the champions, but their fourth Lionesses star – forward Nikita Parris – was absent through suspension.

The sides were meeting in the final for the fourth time since 2013 but the French team claimed their third win from those four meetings, as they beat the Bundesliga champions for a fifth season in a row in the Champions League.

The result extended Lyon’s supreme command over the continent’s biggest women’s football competition as they won the title for the seventh time in nine final appearance since 2010.

Played in front of no fans in the home ground of Spanish men’s side Real Sociedad, the final concluded a nine-day mini tournament of one-legged knockout games in northern Spain, after March’s quarter-finals had to be postponed because of the coronavirus pandemic.

England striker Taylor went close to adding a fourth for the dominant French side in second-half stoppage time but was denied by a good low save from Wolfsburg keeper Friederike Abt.

That came shortly after Le Sommer’s fierce effort had deflected in at the far post off former Wolfsburg midfielder Gunnarsdottir to make it 3-1.

In unique circumstances, the Iceland international was eligible to receive medals as both a winner and runner-up, having signed for Lyon from Wolfsburg this summer and with Uefa allowing players to register for a second team this season for the competition, as a one-off rule because of the virus.

Her third goal eased any tension for the French team, after Germany striker Popp had nodded home from close range shortly after half-time.

But Wolfsburg could not conjure a famous comeback, despite the efforts of the excellent Denmark playmaker Pernille Harder, who is reportedly on the verge of a move to English champions Chelsea.

In the first half, Harder’s team-mates were slow to react in the box as they allowed Le Sommer to slot in on the rebound, after good work down the right from her France team-mate Delphine Cascarino, who caused problems throughout the game. Japan legend Kumagai then gave Lyon control of the game as she struck a sweet second from outside the box.

The match finally brought the extended 2019-20 European season to an end for both men’s and women’s football, a day after England’s top teams competed in the 2020-21 Community Shield fixtures.