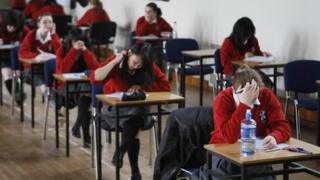 Image copyright PA Media Next year’s A-level and GCSE exams in England should be pushed back to mid-summer to help cope with the impact of coronavirus, Labour has said.Shadow education secretary Kate Green said students starting Year 11 and 13 in September had “a mountain to climb”, having missed months of schooling.Exams scheduled for May…

Next year’s A-level and GCSE exams in England should be pushed back to mid-summer to help cope with the impact of coronavirus, Labour has said.

Shadow education secretary Kate Green said students starting Year 11 and 13 in September had “a mountain to climb”, having missed months of schooling.

Exams scheduled for May should happen as late as July to allow more catch-up teaching time, she added.

The government said it would “consider” its approach but exams would go ahead.

Chaos dogged the exams system this year, leaving teachers, parents and pupils calling for a major re-think of next summer’s exams.

Days after results were announced, and following widespread criticism, the government performed a U-turn and decided to base grades on teachers’ estimates instead.

But many pupils were left in limbo, having already missed out on university places for this year’s intake.

GCSEs and A-level exams are expected to take place as normal next year, but Ms Green said: “It’s so important that the government starts to make contingency plans now so we don’t see a repeat of the fiasco that we saw over the last few weeks.”

She said students heading into year 11 and year 13 – the GCSE and A-level exam years – had seen “a lot of disruption to their education” and “our first priority must be to give the students every possible chance to demonstrate their learning, their attainment and their potential”.

“Young people have never been front of mind when the government has been managing its way, or failing to manage its way, through this Covid crisis,” Ms Green told BBC Breakfast.

But he added: “A delay is not without its problems. A consequential delay to the publication of results will put pressure on higher education providers such as universities and colleges, as well as employers.”

Year 11 student Hemlata told the BBC that “the 2021 exams staying the same is unthinkable”.

But Amber, who is in year 13, said that the delay could be a “false hope” unless there were clear plans to provide results and confirm university admissions in time.

Mary Curnock Cook, former head of the university admissions body Ucas, said a delay to exams would create “massive ripples of impact” on entrance to university, sixth form or progression to apprenticeships.

She said markers already had to read five million GCSE scripts and two million A-level papers on a tight schedule, making it hard to shorten the marking period.

Meanwhile, Conservative MP Robert Halfon, who chairs the Commons Education Select Committee, said there was only a “50:50” chance of A-level and GCSE exams taking place at all next summer, despite the government’s promise.

He told the Sunday Times that exams regulator Ofqual should set an October deadline for deciding whether to cancel them and instead base grades once again on teacher assessments.

Calls for a delay to exams come as millions of children are due to return to the classroom in England and Wales this week. Schools in Scotland and Northern Ireland have already reopened.

A Department for Education spokesperson said: “Getting all children back into their classrooms full-time in September is a national priority, as they are the best place for their education, development and wellbeing.

“We recognise that students due to take exams next summer will have experienced disruption to their education, which is why we prioritised bringing Year 10 and Year 12 pupils back to school last term.

“Exams will go ahead next year, and we have been working closely with the sector, Ofqual and exam boards to consider our approach.”

Head teachers have said they are ready to welcome pupils back to school full-time, with a range of measures being put in place, such as staggered breaks and increased cleaning.

But school leaders have warned that their budgets have been stretched by the pandemic to such an extent that they are having to weigh up pupil safety against their finances, the Guardian reports.

Additional cleaning, personal protective equipment, the installation of hand washing stations and signs, plus the purchasing of laptops for remote working are among the Covid-related expenses incurred by schools, head teachers and unions told the paper.

Meanwhile, a poll of nearly 6,000 school staff in England has found that 86% believe maintaining a social distance from both pupils and staff will not be possible.

The survey by Tes found that 66% feared guidance to avoid busy corridors, entrances and exits was unrealistic.

Are you due to take your A-level or GCSE exams next year? Share your thoughts by emailing haveyoursay@bbc.co.uk.