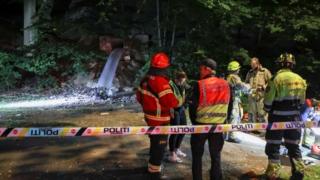 Image copyright Reuters Image caption Around 200 people are thought to have attended the rave Twenty-five people have been taken to hospital with carbon monoxide poisoning after attending an illegal rave in a bunker in the Norwegian capital, Oslo. Five are in a critical condition and two police officers who tended to the partygoers are…

Twenty-five people have been taken to hospital with carbon monoxide poisoning after attending an illegal rave in a bunker in the Norwegian capital, Oslo.

Five are in a critical condition and two police officers who tended to the partygoers are among those poisoned.

Authorities believe the poisoning was caused by portable generators.

Police say the “Rave Cave” event, attended by some 200 people, was discovered by chance when a patrol met a group of confused young people.

Several more then emerged from the bunker and asked for an ambulance.

It was not immediately known who had organised the underground event which was reportedly planned three weeks in advance and kept secret from the authorities.

Oslo police say they are investigating why a tip-off about the rave was not acted upon.

What do we know about the poisoning?

The lives of all of the victims, believed to be mainly aged between 20 and 30, are said to be out of danger but police have called for other attendees to seek medical attention if they start suffering from nausea, headaches or dizziness.

Carbon monoxide is an odourless, colourless gas produced by incomplete burning of carbon-based fuels, including gas, oil, wood and coal. The gas is harmful because it displaces oxygen from red blood cells, resulting in damage to major organs.

One man who left before police arrived told public broadcaster NRK he had gone outside repeatedly for fresh air after arriving for the rave at 23:00 (21:00 GMT) on Saturday.

“When you rave in a room without windows with 50 to 60 others, the air becomes heavy,” the unnamed man said. “I had to go out several times and breathe fresh air.”

The same man said other parties had been held in the same bunker this summer.

Generators were being used to power lighting and sound systems, Norwegian media report.

Vidar Haukeland, head of the company which owns the bunker, Stiftelsen Diakonissehuset Lovisenberg, described the rave as a “serious break-in” and said the company did not feel any responsibility, VG newspaper reports.

Boards covering the entrance to the bunker had been removed, the paper says.

Earlier this month, Norway banned the serving of alcohol in bars after midnight until further notice after a rise in coronavirus infections.

The ban is due to be reviewed in September, Health Minister Bent Høie told Aftenposten newspaper.