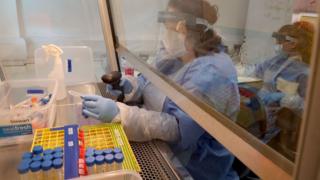 Image copyright Getty Images Nicola Sturgeon has voiced concerns after 160 more people tested positive for coronavirus in Scotland.The latest increase in new cases follows 123 reported on Sunday, with a number of “clusters” across Scotland.The first minister said the rise in cases was “partly the result of a greater number of people being tested”.But…

The latest increase in new cases follows 123 reported on Sunday, with a number of “clusters” across Scotland.

The first minister said the rise in cases was “partly the result of a greater number of people being tested”.

But she said it was “undoubtedly a concern” and that any connection between cases was being “carefully considered” by health protection teams.

A total of 69 of the new cases were reported in the Greater Glasgow and Clyde area, with Ms Sturgeon saying “particularly close attention” was being paid to this.

However, she stressed that the positive results “still represent less than 1% of people newly tested yesterday”.

The number of people in hospital with the virus has increased to 258, five of whom are in intensive care.

The first minister said it appeared the figures in the Glasgow area “seem to reflect a number of small clusters, rather than one or two more significant outbreaks”.

Another 27 cases were reported in Lanarkshire, 18 in Lothian, and eight in Ayrshire and Arran – with Ms Sturgeon warning that the latter “seem to be linked to indoor gatherings”.

However, there were just four new cases in the Grampian area, with Ms Sturgeon saying this was “further indication that the Aberdeen pub cluster is contained.

The first minister said the fact that the number of cases reflected an increase in tests was “an important bit of context to keep in mind”.

But she added: “The number is a reminder to all of us that the virus is still a very real risk, it is a development that concerns me and it is one we are taking seriously.”

The increase in cases comes as the latest easing of lockdown restrictions in Scotland comes into force, with gyms and swimming pools reopening.

“Please follow the guidance – that’s the only way we can make sure these reopenings can happen safely, and they don’t spark an increase in transmission that could take us all back again.

“The figures demonstrate very clearly that this virus is still present across the country. The clusters we have seen show it will spread very rapidly if it gets the chance, and the admissions to intensive care last week remind us that the virus is still immensely dangerous for some people.”