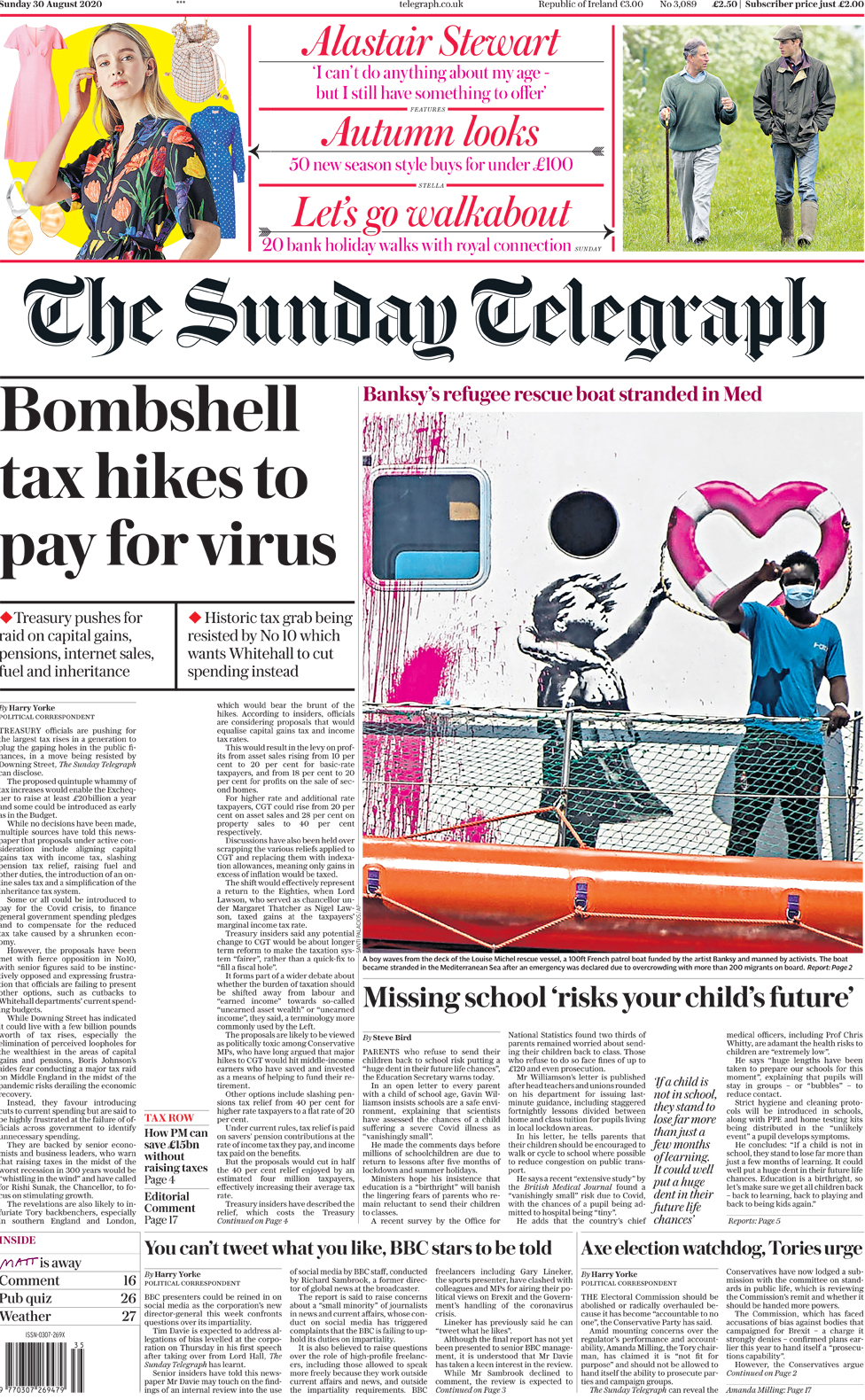 By BBC NewsStaffPublishedduration1 hour agoimage captionSome papers carry photos and tributes to Chadwick Boseman, who died on Friday at the age of 43 from cancer. Celebrities and fans have shared what the late American actor’s work meant to them, particularly his hugely-successful role as Black Panther. Meanwhile, the lead story on the front page of…

make the front of the Sunday Express.

It says government sources believe that scientists at Oxford University and Imperial College London are “extremely close” to developing vaccines which could be rolled out to the entire population – and that, in the best-case scenario, the final trial results may be available in six weeks’ time.

The head of the UK Vaccine Taskforce, Kate Bingham, tells the Express she’s also “cautiously optimistic”, but insists it’s important for researchers to “keep working and not be tempted into celebrating too soon”.

The Sunday Telegraph says a government campaign urging people working at home to go back to the office is being scaled back.

New adverts “extolling the benefits of office working” were expected to be released this week, after one minister suggested that those who continued to base themselves at home would be more vulnerable to the sack.

But The Telegraph reports that the campaign has now been “dialled down” – amid claims from unions and health experts that Downing Street is trying to “bully” people back into city centres, undermining social distancing in the process.

According to The Sunday Times, a prime suspect has been named in the case of a suspected serial killer who may have targeted elderly couples in the north-west of England since the mid-1990s.

The man is apparently identified in a confidential report seen by the paper, which raises “serious concerns” about five cases that were originally ruled to be murder-suicides.

The suspect – whose name can’t be revealed for legal reasons – strongly denies any involvement. Cheshire Police has confirmed it’s reviewing the report.

The Mail on Sunday says the former head of BBC political programming, Sir Robbie Gibb – who left to work for Theresa May when she was in No 10 – is helping set up a new television news service to rival the corporation’s own.

It quotes a source close to “GB News” – who claims it will take advantage of public discontent with the BBC and its “politically correct agenda”.

The broadcaster, Andrew Neil, and the right-wing commentator, Julia Hartley-Brewer, have both reportedly been approached to join the channel, which is expected to launch next year.

Rupert Murdoch’s News UK is said to be working on a similar but separate online service.

And the solemn face of Chadwick Boseman appears on the front of the Observer – following the actor’s death from bowel cancer at the age of 43.

The paper says he’s now become the “lost prince of American cinema”, whose career was defined by his “lightly worn imperiousness, humour and charm”.

For the Sunday People, the star’s passing at such a young age is “incomprehensible” – and an enormous loss not just to cinema but to black culture.

The Sun on Sunday’s film critic explains how he broke the news to his teenage son, who has a large poster of Mr Boseman as the action superhero, Black Panther, on his bedroom wall.

“It was extremely tough,” writes Jamie East – “he was his Elvis, Lennon and Bowie all in one”.