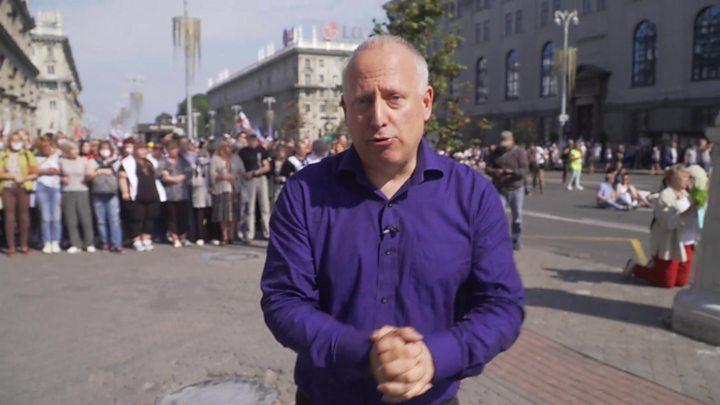 Media playback is unsupported on your device Media captionBBC’s Steve Rosenberg amid the stand-off between protesters and riot police Tens of thousands have again taken to the streets in Belarus, facing off against riot police to protest against President Alexander Lukashenko.A huge police presence has cordoned off areas such as Independence Square in the capital,…

Tens of thousands have again taken to the streets in Belarus, facing off against riot police to protest against President Alexander Lukashenko.

A huge police presence has cordoned off areas such as Independence Square in the capital, Minsk, and the interior ministry reports 125 arrests so far.

Protesters are chanting “disgrace” and “leave” in standoffs with police.

Belarus has been gripped by mass protests since the 9 August election, widely believed to have been rigged.

Mr Lukashenko, who has been in power for 26 years, has said he has no intention of stepping down and denies electoral fraud.

What is the latest on the streets?

It is very tense, with large numbers of riot police facing off against lines of protesters carrying balloons, flowers and red-and-white opposition flags.

The BBC’s Steve Rosenberg in Minsk says there are far more police than during previous protests on the past two Sundays. He says some protesters are lying down on the road to try to prevent riot police from moving, with others chanting “disgrace” and “go away”.

Some mocked Mr Lukashenko on his 66th birthday, carrying a cockroach puppet and chanting “happy birthday, you rat”.

One large group of protesters marched towards Mr Lukashenko’s residence at the Independence Palace, which was heavily protected by riot police and water cannon vehicles. Armoured personnel carriers were seen moving to the area to defend it.

Many streets were blocked off by police in Minsk to try to prevent people reaching the main protest areas.

Other smaller protests are reported in towns such as Brest and Grodno.

Journalists continue to face issues reporting the unrest. On Saturday, the authorities withdrew the accreditation of 17 reporters, most of them Belarusian citizens who have been reporting for foreign media outlets.

Two journalists with the BBC’s Russian service were among those affected. In a statement, the BBC said it condemned “in the strongest possible terms this stifling of independent journalism”.

There is no direct word, although the interior ministry confirmed 125 arrests.

Mr Lukashenko’s press secretary reportedly sent Russian media a picture of him carrying a machine gun outside the Independence Palace. Last Sunday, he was seen wearing a flak jacket and carrying an assault rifle.

It appeared to be the latest sign of Kremlin support for a president who has not always been seen positively by Russia.

But Mr Putin has said he has formed a police reserve force to intervene in Belarus if necessary, although “it won’t be used until the situation gets out of control”.

Unrest in Belarus was triggered earlier this month by an election widely believed to have been rigged in favour of Mr Lukashenko, who has been in power since 1994.

The leading opposition candidate, Svetlana Tikhanovskaya, was detained the day after the vote and left for Lithuania, from where she has since called for protests.

Belarus has seen unprecedented opposition demonstrations and workers have staged walkouts at major state enterprises. Thousands have been arrested and there have been numerous reports of police brutality.

At least four people have died and hundreds have been injured.

The European Union and the US are among those to reject the election as neither free nor fair. The EU is preparing sanctions against officials it accuses of rigging the result to deliver Mr Lukashenko’s victory and of cracking down on the opposition movement.

Mr Lukashenko, who has already served 26 years as president, claimed a sixth term when election authorities said he had won 80% of the vote. But Ms Tikhanovskaya said she had won 60-70% based on results that had been properly counted.

A criminal case has targeted the Co-ordination Council, which has since been set up by the opposition. Mr Lukashenko accuses it of trying to seize power.

The most prominent opposition leader inside Belarus, Maria Kolesnikova, has been questioned by prosecutors – as has Nobel literature prize-winner Svetlana Alexievich.