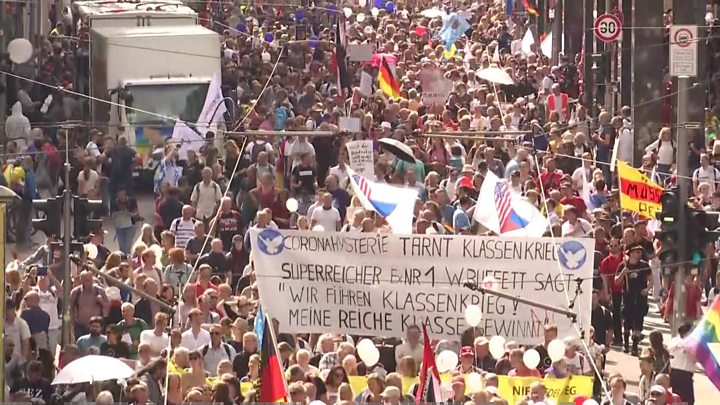 Media playback is unsupported on your device Media captionThousands took to the streets of Berlin to rally against coronavirus restrictions Thousands of people have marched through the German capital Berlin in protest at coronavirus restrictions.Police imposed mandatory mask-wearing and social distancing – and by midday ordered demonstrators to disperse for flouting the order.The rally was…

Thousands of people have marched through the German capital Berlin in protest at coronavirus restrictions.

Police imposed mandatory mask-wearing and social distancing – and by midday ordered demonstrators to disperse for flouting the order.

The rally was mostly peaceful, but police later made “numerous arrests”.

City authorities had tried to stop the march from going ahead, fearing safety measures would be ignored, but a court overturned the ban.

What is happening now?

Police issued their order to disperse after participants refused to keep a safe distance from each other, the authorities said.

“Unfortunately, we have no other option,” Berlin police said on Twitter. “All the measures taken so far have not led to compliance with the conditions.”

Police said protesters dispersed largely peacefully although there were some pockets of unrest, with officers using pepper spray.

Some demonstrators remained on the Unter den Linden, near the Brandenburg Gate, where cookery author and conspiracy theorist Attila Hildmann spoke through a loudspeaker. Berlin police later said they had arrested “an author of vegan cookbooks”.

They tweeted: “We had to carry out numerous other arrests for… throwing bottles… and other criminal offences.”

Who is involved in the Berlin protests?

The demonstration was organised by the Stuttgart-based movement Querdenken 711 (or Lateral Thinking 711). The group has more than 16,000 followers on Facebook and communicates largely through encrypted messaging service Telegram.

The group previously organised a protest in Berlin on 1 August dubbed the “day of freedom”. Thousands joined, including some from the far right and some conspiracy theorists who do not believe Covid-19 exists. German news site Deutsche Welle reported that flags and T-shirts supporting the far right could be seen among the crowd on Saturday.

Mr Kennedy told a crowd at the Victory Column that his uncle had famously addressed Berlin in 1963 to counter totalitarianism and that “today Berlin is again the front against totalitarianism”, warning of a surveillance state and the power of 5G phone networks.

Photos shared online also showed flags and slogans linked to the conspiracy theory QAnon. The wide-ranging, unfounded conspiracy theory says that US President Donald Trump is waging a secret war against elite Satan-worshipping paedophiles in government, business and the media, among other claims.

Another protester told TV station ARD the number of “severely sick” was “trending downward”, adding: “At the same time we have more testing. And we have measures that are totally out of proportion. This craziness must be stopped and allow a normal life again.”

One counter-protester told AFP: “Querdenken is openly right-wing… by marching together with them today… you offer them a stage in the middle of society. And that is not acceptable.”

Mrs Merkel said: “We will have to live with this virus for a long time to come. It is still serious.” She said it would become more challenging in the winter.