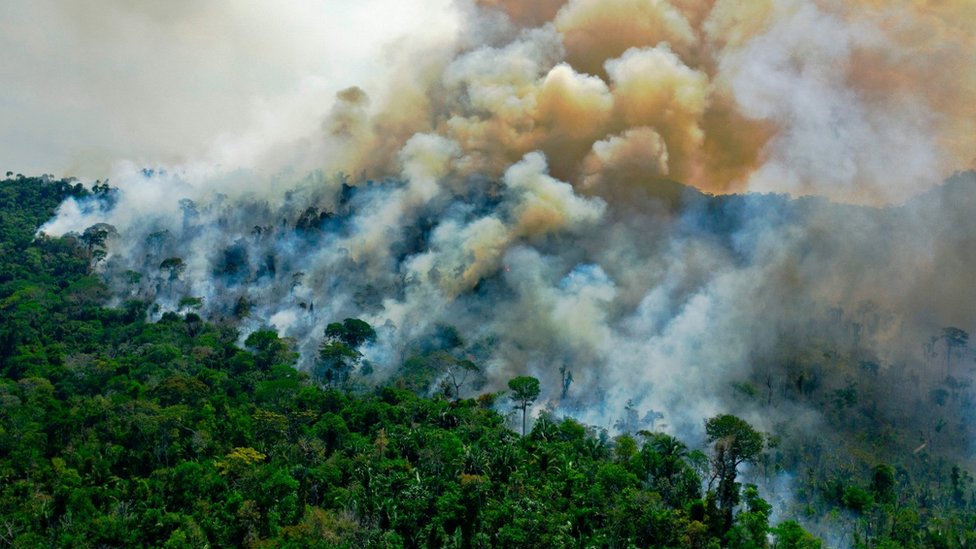 By Jack Goodman and Christopher GilesBBC Reality Check and Visual JournalismPublishedduration39 minutes agoimage copyrightGetty ImagesPreserving the Amazon rainforest is of global importance in the fight against climate change, but it is under threat from forest fires, mostly started to clear land for agriculture.Early numbers from this year’s fire season show an increase, leading to concern…

Preserving the Amazon rainforest is of global importance in the fight against climate change, but it is under threat from forest fires, mostly started to clear land for agriculture.

Early numbers from this year’s fire season show an increase, leading to concern from scientists.

President Jair Bolsonaro of Brazil recently said that claims the Amazon “is going up in flames” were not true, despite statistics published by his own government showing the spread of fires.

So what does the data show about what’s happening this year?

Is the forest in Brazil burning?

Brazil is a huge country with many different environments, including grassland, wetland and rainforest.

Some 60% of the Amazon rainforest is in Brazil, and it plays a vital role in absorbing harmful CO2 that would otherwise escape into the atmosphere. So there’s particular concern about the damage that fires might do here.

The total number of fires in Brazil’s Amazon until July this year is high – but slightly lower than the same period last year.

But there is concern about a surge in blazes last month, earlier than would normally be expected.

“An increase also happened in June (19.6% compared to June last year, and 36.1% compared to the average for the month of June between 2010-19). The peak of the fire season is often seen in August to September.

“So the consistent increase in June and July is worrisome,” says Prof Castro.

And alerts so far in August look set to rival the number recorded last year. Fires this year are at the second highest level since 2010.

In the first seven months of 2020, more than 13,000sq km (5,019sq miles) of the Brazilian Amazon was burned, according to analysis of satellite data provided by Dr Michelle Kalamandeen, a tropical ecologist on the Amazon rainforest.

That’s more than eight times the size of London.

“When a forest is lost, it is gone forever. Recovery may occur but never 100% recovery,” she says.

When you look at the spread of the fires in Brazil, during the week of 11 August, there were noticeable clusters of fires in the Amazon, with Para, Mato Grosso, Amazonia and Rondonia states reporting a high number of alerts.

In areas around Novo Progresso in Para state, farmers reportedly held a “day of fire” last year and satellites have picked up more than 1,300 fire alerts in the past month, according to official statistics.

To the north-east, the large municipality of Altamira has recorded the most fires in Brazil’s Amazon region during this period.

What could make it worse this year?

The first is that this year’s dry season is much drier than usual.

“The waters of the tropical north Atlantic are warmer this year and when that happens, we have less rainfall over the southern Amazon,” says Professor Nobre.

The second is that there is a lot of felled forest left over from last year’s logging – this is chopped wood that can fuel fires.

This year, the army has been conducting an operation to stop deforestation since June, and in July, President Bolsonaro imposed a four-month ban on forest fires.

A week ago, Vice-President Hamilton Mourao launched a campaign against fires, including an app for the public to report them.

He acknowledges the fires are a problem and has said he wants to reduce burning and logging, but activists and government critics remain sceptical, according to Camilla Costa, a BBC World Service journalist.

According to the Brazilian defence ministry, 28,100 cubic metres of illegal wood has been confiscated with fines totalling 407.2 million Brazilian reais ($72.6m; £55m).

However, fires have continued in the region and critics complain about a lack of enforcement.

Is the forest on fire in other countries?

The number of forest fires in the Amazon regions of Colombia, Peru and Venezuela is up on this time last year.

For Amazonian countries, mining and agriculture is driving deforestation and as a result forest fires, according to Dr Kalamandeen.

In Venezuela, an increase in mining for gold is likely to be behind the increase, as since 2016 President Nicolas Maduro has opened up the sector to try and stem the country’s economic collapse.

In Colombia, following the government’s rapprochement with rebel group Farc in the past few years, areas have been opened up for farming, causing an increase in blazes, says Dr Kalamandeen.