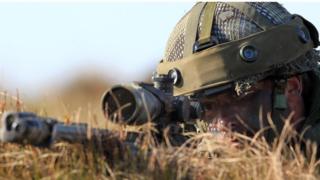 Image copyright AFP Image caption The group says sniper training was provided to Bahrain (file image) The UK has been providing military training for “some of the world’s most repressive regimes”, according to a campaign group.Campaign Against Arms Trade (CAAT) has published a list of 17 countries listed by the Foreign Office as “human rights…

The UK has been providing military training for “some of the world’s most repressive regimes”, according to a campaign group.

Campaign Against Arms Trade (CAAT) has published a list of 17 countries listed by the Foreign Office as “human rights priorities” which have all received some form of British military training.

It includes training on fast jets and in amphibious warfare.

Neither the Ministry of Defence nor the Foreign Office has disputed the list.

The data stems from a parliamentary question which revealed that from 2018-2020, the UK has been providing military training to more than half of the 30 countries defined by the Foreign Office as being places where the government is “particularly concerned about human rights issues”.

Specific examples of the training include:

All of these countries have been heavily criticised by human rights groups.

In its latest report on Saudi Arabia, the human rights group Amnesty International says “the authorities escalated repression of the rights to freedom of expression, association and assembly”.

In Belarus, the authorities have drawn international condemnation this month for their brutal treatment of pro-democracy protesters, while in China “the human rights situation continued to be marked by a systematic crackdown on dissent”, according to Amnesty International.

Asked for comment, an MoD spokesperson told the BBC: “Every defence relationship is taken on a case-by-case basis.

“Any defence engagement is designed to educate where necessary on best practice and compliance with international humanitarian law’.

Andrew Smith of CAAT said: “By training and collaborating with despots, dictatorships and human rights abusers, the UK risks making itself complicit in the abuses that are being inflicted.”

He said that the case that stood out the most was that of Saudi Arabia where UK and US-supplied arms have been used in the war in Yemen, at times leading to civilian casualties.

In Yemen’s disastrous six-year civil war, both the Saudi-led air campaign and the Houthi rebels have been accused of war crimes.

“The fact is that the UK has a close military relationship with a lot of undemocratic and abusive regimes,” Mr Smith added.

Mr Smith said he is not calling for an end to all engagement with these countries but rather a parliamentary review into the nature of the assistance Britain gives them.

The Parliamentary Defence Select Committee chairman, MP Tobias Ellwood, defended the practice of working with countries on the list.

“The aim is to nudge these countries towards the same standards that we uphold,” he said.

“If we backed away from supporting them then who would fill the vacuum? We are denying space for Russia and China to advance their footprint (in these countries).”

Mr Ellwood conceded that the UK government faced something of a dilemma over the issue, however. He told the BBC that urging countries to move towards what the UK considered to be best practice was “a long journey – a marathon, in fact.”