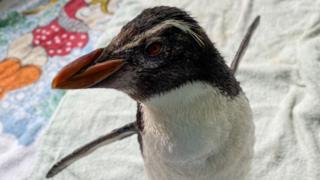 Image copyright Perth Zoo A penguin watching Pingu on an iPad to stop him feeling lonely should be the ultimate evidence we really can expect anything in 2020.And it’s actually, legitimately happening at Perth Zoo in Australia.The penguin, who’s been called Pierre – because at this point why not – was found washed up on…

A penguin watching Pingu on an iPad to stop him feeling lonely should be the ultimate evidence we really can expect anything in 2020.

And it’s actually, legitimately happening at Perth Zoo in Australia.

The penguin, who’s been called Pierre – because at this point why not – was found washed up on a beach in the south west of the country.

He’s an endangered Northern Rockhopper penguin, and the only one in care anywhere in the whole of Australasia.

Pierre’s keepers – who we assume are the ones taking care of the Netflix subscription – were worried he’d not get enough socialising while he gets healthy enough to return to the wild.

So they’re showing him the cartoon, along with live streams of other rockhoppers around the world – including the ones at Edinburgh Zoo.

‘He’s not waterproof – he can’t swim’

“Pierre should be in the Indian or sub-Antarctic oceans at this point,” Danielle Henry from the zoo tells Radio 1 Newsbeat.

“He’s not meant to be here, and he wasn’t in the best health when he came to us,” she says.

Pierre’s feathers are meant to moult once a year, which means they fall out as a brand new lot grow in.

But they aren’t really doing that at the minute.

It means he’s not waterproof. And you don’t have to be an expert to see how that could be a problem for a penguin.

“We think he’s about a first year bird so he’s really quite young,” says Danielle. “For some reason his new feathers got half way through and completely stopped.”

“Pierre can’t swim, he can’t fish for himself. So he needs a helping hand.”

‘He doesn’t realise Pingu’s a penguin’

That’s the science. But the big question you’ve had since opening this story is, does he even like Pingu? Right?

“He’s absolutely loved it,” says Danielle. “But he probably doesn’t realise that Pingu is a penguin. He’s just responding to the colour and the movement.

“From his behaviour we can tell he’s enjoying it. He’s vocalising really well. And that’s exactly what we wanted him to do.”

Yes, we think we can say it. He’s talking to Pingu.

Danielle says the plan is still to get Pierre back into the wild.

But experts have told them it could take two to four rounds of moulting.

“In the meantime, we are hoping we can get him into another zoo where there are other rockhopper penguins,” she says.

That might be not a bad plan for Pierre. Because while a quick search tells us there are 157 episodes of Pingu out there, they last for just over five minutes.

And after living with lockdown, we’re confident enough to say any binge watching can get pretty repetitive – even in penguin.