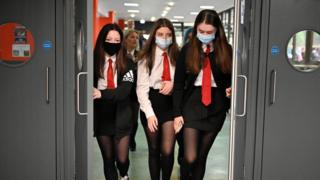 Image copyright Getty Images Image caption Face coverings will only be required in corridors, communal areas and on buses in some schools Head teachers say they are ready to welcome young people back to school in England and Wales full-time next week.Some 97% of schools, surveyed by the National Association of Head Teachers, said they…

Head teachers say they are ready to welcome young people back to school in England and Wales full-time next week.

Some 97% of schools, surveyed by the National Association of Head Teachers, said they would be opening their doors to all pupils at the start of term.

NAHT general secretary Paul Whiteman said the figures showed how hard schools had been working to make new arrangements to minimise any risk.

Schools are staggering lunch, break and start times and stepping up cleaning.

Nearly all have created “bubble” groups of pupils, erected signs to direct pupils and parents around the school, as well as installing extra hand washing and sanitisation stations, the survey of 4,000 heads in England and Wales showed.

The 3% of schools which said they would not be fully open were preparing for a phased return of pupils.

The school term starts on Tuesday or Wednesday next week, although it can be slightly different from area to area.

Some schools are using the first week as a transition with inductions on the new way of operating for pupils.

Nodding to the stream of government U-turns over face masks, social distancing rules and exam grades during the summer, Mr Whiteman made a direct appeal to parents.

“Please do not let the very public political difficulties and argument cloud your confidence in schools,” he said.

“School leaders and their teams have continued to do all that has been asked of them.

“With co-operation and understanding between home and school, we can achieve the very best return possible despite the political noise.”

In a further plea to government, the head teachers’ leader called for detailed plans to be provided about how schools should respond in the event of further lockdowns.

He said: “You don’t need a crystal ball to see that local restrictions will be a feature of the autumn and winter.

“We’ve already seen them happening in a few areas of the UK.

“All we’re asking the government to do is meet us halfway.

“We’ve done everything we can to get ready but we can’t have any more last minute plans.

“Last minute contingencies have caused chaos so far, but a credible, well understood set of alternatives for schools in the event of a lockdown will not only give us something to work with but will also help to reassure any families that are still nervous about coming back on day one.”

The NAHT is not alone in calling for “a Plan B”, with all the major teaching unions asking for one.

Ministers and officials are understood to be drawing up a set of new guidelines for schools who face an increase in cases in their areas.

These are expected to see secondaries shift to a two-weeks-open, two-weeks-shut rota, while online learning continues and primaries remain open.

But just days before schools are due to reopen, they are still not published.

School closures in the lockdown mean that pupils will have missed a significant chunk of learning, with some experiencing other serious issues over the period.

About 71% of those polled believed they would not be able to help all pupils catch up what they have missed without extra support for pupils who have experienced bereavement, mental health issues or abuse at home.

The research for the Institute of Public Policy Research suggests huge proportions of teachers are not comfortable in recognising or supporting pupils who have faced such problems.

It is calling for schools to identify and report data on pupils they believe are vulnerable when schools reopen.

IPPR associate director Harry Quilter-Pinner said: “September is a vital moment to assess the impact lockdown has had on the most vulnerable children and young people, and ensure they get the support and attention they need to thrive.”