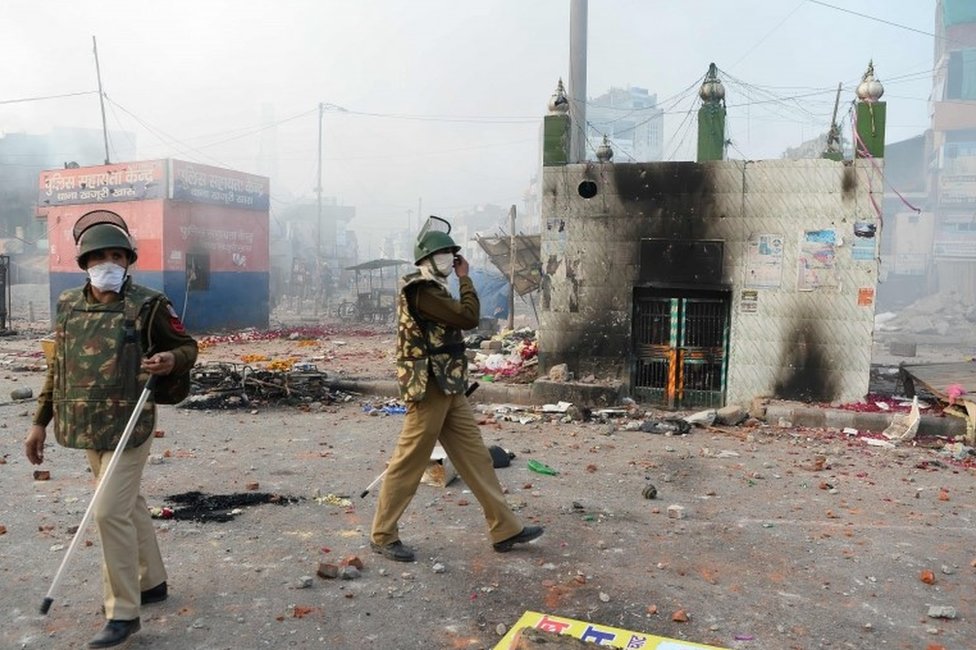 More than 40 people died when clashes broke out between Hindus and Muslims over a controversial citizenship law. Muslims bore the brunt, Amnesty said.

The Delhi police are yet to respond to Amnesty’s request for a response.

The investigation corroborates the BBC’s reporting on

incidents of police brutality and complicity during the riots in February, the deadliest in the city for decades. The police denied any wrongdoing.

Videos had emerged on social media and messaging groups from the Khajuri Khas area in north-east Delhi, in which police are seen acting with a mob and throwing stones. We investigated these videos by gathering eyewitness testimony from both communities.

One shopkeeper alleged that police gave stones to him and other Hindus to throw at Muslims over the road. Bhoora Khan, a Muslim whose home and shop across the street were burnt down, also alleged the police acted with Hindus against Muslims.

We also investigated another set of videos that showed a group of policemen brutally beating a Muslim man, Faizan. The man died a few days later. His brother Naeem told me Faizan succumbed to the injuries he suffered at the hands of the police.

While the Delhi police didn’t initially respond to the BBC’s request for a reply, after the report aired, they told BBC Hindi they would look into what is seen in these videos. But many, including Amnesty, are asking how the police can be trusted to investigate allegations against their own men.

The Amnesty report says that while Hindus also suffered losses, Muslims were disproportionately targeted in the riots.

“The riot that seemed far from spontaneous saw almost three times the number of Muslim casualties compared to Hindus. Muslims also bore the brunt of loss of business and property,” it said.

“The percentage may be lower but establishments and homes owned by Hindus were not left completely untouched,” it added.

The Citizenship Amendment Act (CAA) – which critics say is anti-Muslim – sparked massive protests across India after it was passed last year.

One such demonstration in Delhi turned violent – clashes broke out between protesters for and against the law.

Read more about the Delhi riots

The violence soon took religious overtones and the rioting continued for three days, with Muslim homes and shops being targeted by violent mobs.

The report says its forensic analysis of videos from the rioting supports the conclusion that the police stood by, allowing rioters to wreak havoc in some places.

It also alleges that hate speeches by right-wing leaders sparked the riots – but notes that the police have taken no action against them.

On the other hand, it says, police have arrested civil rights activists, teachers and students, most of them Muslim.

“Not even a single political leader that made hate speeches, which advocated violence in the build-up to the riots has been prosecuted,” it said.

The report recommends an independent inquiry into the allegations.

Several other reports have also raised questions over police conduct during the riots. A report by the Delhi Minorities Commission also alleged that the police allowed Muslim homes and shops to be targeted by mobs.