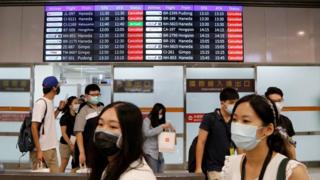 Image copyright Reuters Image caption With many flights cancelled, companies are trying to give travel fans a sense of nostalgia As the coronavirus pandemic continues to ground many flights, people are looking for ways to get their flying fix without travelling abroad. With that in mind, numerous companies are coming up with ways of catering…

As the coronavirus pandemic continues to ground many flights, people are looking for ways to get their flying fix without travelling abroad.

With that in mind, numerous companies are coming up with ways of catering to those who want to remember what it’s like to be back in the skies.

From airplane food at home to flights to nowhere, here’s how you can get your travel fix.

Qantas is not planning to offer international flights until next year, but you can purchase pyjamas from the airline along with amenity packs.

Many of the items for sale would be found in the airline’s premium cabins.

Qantas’s executive manager of product and service, Phil Capps, said: “Qantas PJs are always popular, and with people spending a lot more time at home and wishing they were travelling somewhere, we think receiving a surprise pair in the mail will be very well received.”

The move was so popular that all 10,000 of the available pyjamas sold out within hours.

When the pandemic hit, suppliers for airlines were among the first to feel the pinch.

One supplier, GNS Foods, has been selling its nuts to United Airlines for the past two years. But in March, the airline removed the products from all of its flights, saying that it was reducing contact between passengers and flight staff.

It made the decision to sell the nuts online in a bid to help make some cash for the business.

The company is selling its First Class Mixed Nuts and the Aloha Mix, featuring diced pineapple, which is usually served on flights to Hawaii.

In July, Taiwan’s Songshan airport offered people the opportunity to go on a “flight to nowhere”.

Customers would be able to check in, go through airport security and then board a plane. The only catch? The flight wasn’t going anywhere.

More than 7,000 people applied for the 60 available seats.

The event proved so popular that a number of airlines have since offered similar experiences.

Some, including Eva Air and StarLux Airlines, are now offering trips where the plane takes off, flies around the region for several hours and then lands at exactly the same airport it took off from.

Passengers are treated the same as if they were travelling to another destination.

“Cries for going abroad are getting stronger. To satisfy travellers wishes, Eva Air has decided to introduce an alternative travel experience,” the airline said in a statement.

Before boarding a Qixi Festival (Chinese Valentine’s Day) flight from Taoyuan airport operated by StarLux, one man proposed to his girlfriend.

An airplane meal from your armchair

A number of airlines are selling their airplane food online.

In Germany, an online grocery store is selling food from LSG Sky Chefs – the suppliers used by national carrier Lufthansa.

The service, named Air Food One, provides business-class quality meals. The meals match that of the food currently available on planes, according to Mashable.

Similar initiatives are available from airline food suppliers in Canada, Australia and Thailand.

If you’re really missing the feeling of eating on a plane, then Garuda Indonesia is selling its airline food served on a tray.

Rubi Haliman, a frequent flier, has placed orders of food from the airline.

“I missed flying and seeing food carts moving in the aisle of the plane,” he told the South China Morning Post.

He said the food was enough “to overcome the feeling of missing in-flight meals” and that he had already planned his next order.