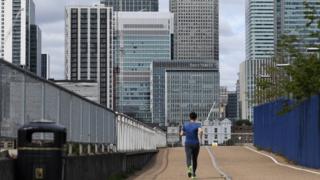 Image copyright EPA People will again be encouraged to go back to their workplaces as part of a government campaign starting next week.Employers will be asked to reassure staff it is safe to return by highlighting measures taken to prevent the spread of Covid-19.Business leaders have warned of damage being done to city centres as…

People will again be encouraged to go back to their workplaces as part of a government campaign starting next week.

Employers will be asked to reassure staff it is safe to return by highlighting measures taken to prevent the spread of Covid-19.

Business leaders have warned of damage being done to city centres as people stay away from offices.

And Transport Secretary Grant Shapps said some things were “impossible” to do remotely.

But Health Secretary Matt Hancock said he cared more about how employees performed than where they were working.

Dave Penman, general secretary of the FDA union, which represents civil servants, said ministers needed to accept the “world of work has changed” and millions of employees were working from home successfully.

Ministers in Scotland, Wales and Northern Ireland are still advising people to work from home if possible.

The campaign, which will launch as most schools in England and Wales reopen, will predominantly be promoted through regional media, BBC political correspondent Iain Watson said.

Meanwhile, nine in 10 UK employees who have worked from home during lockdown would like to continue in some form, according to a survey.

The research by academics at Cardiff and Southampton universities – which involved thousands of people between April and June – suggests the majority of people working from home are as productive, if not more.

Whitehall sources insist the campaign will not suggest those who continue to work from home are at any greater risk of losing their jobs.

Labour’s shadow business minister, Lucy Powell, said no one should be forced “to choose between their health and their job” and the government should “categorically rule out” any campaign suggesting people could be out of a job if they refused to return to the office.

She called for a fast and reliable test-and-trace system, better enforcement of transport and workplace safety and more childcare support.

The messaging comes as head teachers say they are ready to welcome young people back to school in England and Wales full-time next week, which should make a return to the workplace more feasible for many parents.

The employers’ organisation the CBI has warned city centres could become “ghost towns” if the prime minister does not do more to encourage staff back, with businesses relying on passing trade from office workers.

Some prominent Conservative MPs share these concerns and have urged ministers to deliver a clear and consistent message that it is safe to return.

But Mr Hancock said getting staff back to work was a “matter for employers” and, when asked about the Department for Health, that his main concern was how employees performed.

“Some of them have been working from home, some come in sometimes, some are in full-time – and what matters to me is that they deliver and, frankly, they’ve been delivering at an unbelievable rate,” the health secretary told Times Radio.

Mr Shapps told BBC Breakfast his own department was encouraging people to return to the office but it was “a gradual process”.

Where it is safe to do so, the transport secretary said people should go back to their workplaces, adding that there were some things which were “impossible” to do remotely.

“But I suspect we’ll see more flexible working than we’ve seen in the past and it will be for employers and employees to work out the right balance in their particular cases,” he said.

Mr Shapps said employees with “legitimate concern” over whether their workplace was “Covid-secure” could raise this with the Health and Safety Executive but most employers had worked hard to make them safe.

He acknowledged the return of pupils to school and parents to work tended to “create pressures” on the public transport system.

“We’ll be watching those very carefully and looking to, for example, in some cases run additional services where we see those problems bubble up,” he said.

However, Scottish First Minister Nicola Sturgeon said people returning to offices as normal would put pressure on public transport and create “too high a risk of the virus spreading very quickly”.

Can employers force staff back to the office?

In the overwhelming majority of cases the return to office work – or the continuation of home-working – will be a matter of discussion between employers and employees. Businesses will heed public health and government employment guidance, carry out risk assessments, meet employees’ concerns and make any reasonable adjustments to facilitate a return to a safe office.

Much will depend on the nature of the business and the specific employee role, but there are two principal grounds on which employees can challenge an employer’s demand that they return to the office.

Firstly, if the employee is disabled or has a condition which puts them at a higher risk of contracting Covid-19, or suffering more severely if they do contract it, they could challenge the demand as discriminatory under the Equality Act. Age could also play a part here as older workers could argue they are more vulnerable to the virus.

Those workers, who tend more often to be female and are caring for others who are especially vulnerable to the virus, could bring indirect sex discrimination claims if compelled to return.

Secondly, the Employment Rights Act protects employees who reasonably believe there is a “serious and imminent” risk of danger in returning to work. This could include risks in getting to and from the workplace.

If meaningful work has been carried out at home during lockdown, it will be difficult for employers to resist requests for flexible working. However, employees must be mindful of their duty to carry out any demands from their employer which are legal and reasonable.

Between 27 July and 9 August, 39% of the workforces of businesses still trading were working remotely, according to the Office for National Statistics.

The industries with the largest proportion of employees working remotely were education and information and communication, where the figure was more than 70%.

Figures from investment banking company Morgan Stanley suggest the proportion of UK office workers operating in their normal workplace is less than half that of other major European countries.

A BBC study found 50 major UK employers had no plans to return all staff to the office full-time in the near future.

One of the main reasons given was that firms could not see a way of accommodating large numbers of staff while social distancing regulations were still in place.

In May, Boris Johnson said people who could not work from home – such as those in construction and manufacturing – should return to the workplace.

Then in July, he told people to “start to go back to work now if you can” and has repeated the plea since then.

On Thursday, the UK recorded its highest number of new daily Covid-19 infections since mid-June – but there was also a new low in the number of people being treated in hospital.